This post is a follow up to my earlier article about the century old cemetery at Chestnut Drive.
I want to focus on the early pioneers living around Upper Bukit Timah area from where eventually my old village Princess Elizabeth Estate would be a part of.
In particular this is my tribute to Father Anatole Mauduit and Father Jean Marie Belliot, two giants who built the pioneering community around the area.

In the early days of Singapore, even before the Raffles founding of 1819, there were already Chinese immigrants working on gambier and pepper plantations on the island. Gambier was a plant that was used with the chewing of betel nuts and was also used for dyeing and tanning of leather.
It was the cash corp of its day.


This is an antique map of Singapore in 1852 showing areas of pepper and gambier plantations around the northern Upper Bukit Timah region.
The plantations were organised under a land tenure system called "kangchu"(  港主 ) in the Chinese Teochew dialect. Each kangchu (translated as 'river master') was led by a headman whose name gave rise to the area. The kangchu obtained his grant directly from the Temengong of Johor, which gave him the right to farm the river side lands.

In the above map you can see kangchus marked and named as Leem Chu Kang, Chu Chu Kang, Lau Chu Kang, Tan Chu Kang, Nam To Kang and Chan Chu Kang.
Some of these areas are still known by these names today like Yio Chu Kang, Choa Chu Kang and Lim Chu Kang. That was how the term 'chu kang' ( 厝港 ) meaning kangchu settlements came about.

While Raffles was a visionary who planned for the commercial success of the island, there was another group of men who had an equal vision for the betterment of the populace. These were the French missionaries from the society called Missions Etrangere De Paris or MEP.

Besides evangelisation, they reached out to the early settlers through building of churches and schools. Father Jean Beurel, who was head of the local mission then, built the Church of the Good Shepherd at Bras Basah, St Joseph's Institution, the Church of Ss Peter and Paul at Queen Street and the CHIJ Convent at Victoria Street.

He sent Father Anatole Mauduit to set up St Joseph Church at Kranji in 1846 where there were about a hundred Catholics working in the gambier plantations.
Initially, Father Mauduit, with the assistance of Fr Adolphe Issaly, started the church at Kranji at a village called Boko Kang but moved to the present location after Fr Beurel bought 30 acres of jungle land from the English East India Company. This new location was about 3 miles south from Kranji along Bukit Timah Road.

They built a church of wood on the hilltop, which was known locally known as Tek Ko Swa, with space reserved for a cemetery at the rear. (Tek Ko Swa is Teochew for bamboo hill). The church was completed in 1853.


Father Mauduit died in 1858. For the next twenty years, the french MEP missionaries continued the work of ministering to the people in the rural northern regions. In 1878, came Father Jean-Marie Belliot, who was to stay on for the next 54 years at St Joseph.

In 1905, Father Belliot re-built the church, replacing the wooden building with a new paladin style church that would last till 1965.  Fr Mauduit and Fr Belliot both died in Singapore and were buried in the small cemetery behind the church that they built.


Here is an extract from the book "The French in Singapore" by Maxim Pilon & Daniele Weiler. It tells of the hardships faced by the early missionaries in the tiger infested and Chinese gang controlled region of Bukit Timah.
"Life on the plantation was harsh: the workers were poor, and the dangers constant. An MEP report states: At Singapore, the Chinese Church is within the forest. The zeal of Father Mauduit had overcome all the obstacles and his little flock is increasing everyday. His catechumens are admirable, full of simplicity and fervour. They are poor, and their priest even poorer than them all; he considers himself lucky when he gets enough rice and plantains for his meals." 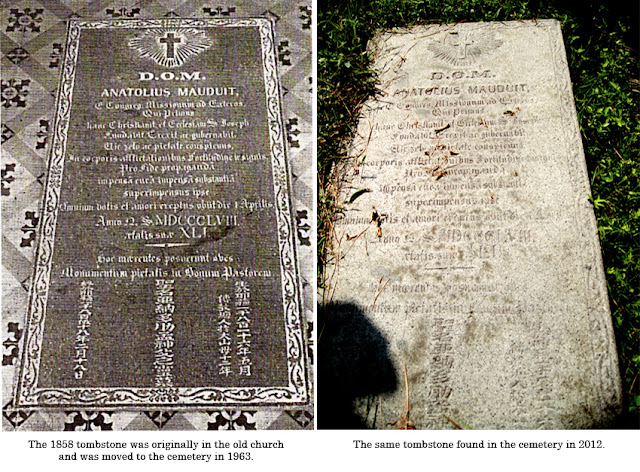