The railway bridge at Hillview Road.

Before the year 1948, what would become Hillview Road was nothing more than a country track that was the land boundary between two gambier plantations belonging to Messrs. J Jacobs and Messrs. Tang Kok. This boundary track led from Upper Bukit Timah Road at 9-1/2 milestone into the Bukit Gombak farms and rubber plantations.

What had puzzled me for a very long time was the railway girder bridge that was built over the later Hillview Road.  I was confused because I knew that Hillview Road was only constructed in 1948 but the KTM (Keretaapi Tanah Melayu) railway line was built in 1932, a good sixteen years before the road was built. So my question was 'Did they build the girder bridge over a country track?'. If so, why would they do that? Was there a need to build a bridge there? It didn't make sense to me.
Moreover, about 500m further down, there was also another country track called Lorong Taluki. This track crossed the KTM line too but there was no bridge, just a slope up to the embankment and then down the leeward side. Why did they need a bridge here? 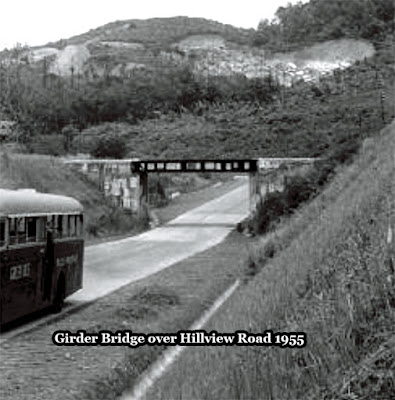 I even referred to my good friend, Dr Lai Chee Kien, who has extensive expertise with the rail system in Singapore. Dr Lai and I both lived at Fuyong Estate before where we would see the KTM trains passing everyday on the high embankment along the Hillview ridge. Dr Lai wasn't too sure of the reason as well. So, was the bridge there even before Hillview Road was built?

For a long time, I left the question open till about a month ago when I found a photomap dated 15 April 1948. The aerial map showed the on-going construction of Hillview Road and Hillview Avenue on that date. It totally resolved the question of the girder bridge!

Hillview Road was created by cutting through the ridge from Bukit Timah Road. Passing the road today, you can still see the cut made then. Hillview Road is like a huge hump with the summit exactly where the gate of the former Union Carbide Co (then National Carbon) was. Hillview Road and Hillview Avenue were specifically created for access to the two new factories of National Carbon and Malayan Guttas.

As I had mentioned in a previous article, the creation of Hillview Road and Hillview Avenue was the first time that the area was officially called 'Hillview'. The name was used because at the other end of this Hillview ridge near Bukit Batok Hill, there was a grand private country estate called 'Hillview Estate'. This country house Hillview Estate was the wartime headquarters of the Australian Division that fought the invading Japanese army in 1942.

Though, adequate at its time, the girder bridge at Hillview Road was to become a bottleneck for vehicles with increasing economic activities in the 1970s. Hillview Road was then the only access to the industrial factories being built at Hillview. The solution, in 1969, was to extend the other end of Hillview Avenue to join Jurong Road at Bukit Batok.

The girder bridge was dismantled and removed on 26 November 2011 as a result of the return of the KTM land by the Malaysian government to Singapore. The bridge support buttresses were only removed in 2017 and we can expect that Hillview Road will be further widened in future to accommodate the increasing traffic through the area.

Other links to the girder bridge:-
The Girder Bridge at Hillview
The development of Hillview Avenue
The colonial Hillview Estate

Recently, I was invited to lead a heritage tour for a group of Australians. They had one thing in common. All of them had a relative who either fought or died in Singapore during World War Two. They wanted to follow in detail the footsteps that their grandfathers or grand-uncles had taken during the war here. And remarkably, each of their relative had fought at Bukit Batok, then known as West Bukit Timah.
Without going into too much details, here in brief is what had happened at the battle for Bukit Batok.

On 8th February 1942, the Imperial Japanese Army invaded Singapore by landing at the beaches at Lim Chu Kang.

The following day, 9th Feb 1942, the British forces tried to set up a blockade at the Bulim area. This was called the Kranji-Jurong Line. The strategy was to prevent the invaders from going past the area between the Kranji and Jurong Rivers.

The planned blockade failed even before the opposing Japanese forces had reached this frontline.
Of the four groups sent to form the blockade, two withdrew far from the battle line, while another two units retreated back to the base of Bukit Batok hill to face the oncoming Japanese army there.

These latter two units were the 15th Indian Brigade and the Special Reserve Battalion.
The 15th Indian Brigade comprised the Jat Regiment, the British Regiment, the Punjab Regiment and the Leicestershire Regiment. Each regiment was deployed to defend the front-line which was basically along Jurong Road.
A further two expeditionary forces called X Battalion and Merret's Force were also sent to assist the 15th Brigade in defending Jurong Road. X Battalion was dug in to defend Hill 138, which was the Jurong I Trigonometry Station, just south of the 9th milestone Jurong Road. Merret's Force was unable to locate their planned defence position at Jurong Road but took up a new position south of X Battalion.

Just before midnight of 10th February 1942, the Japanese army confronted the defending British Forces along Jurong Road, and thus, the battle of Bukit Batok began.
First along the line was X Battalion that was caught off guard. They lost 280 men out of their force of 400, killed in battle that night. This was followed by the almost total decimation of Merret's Force at Toh Guan, losing a further 120 soldiers.
Skirmishes continued along Jurong Road with the Special Reserve Battalion who managed to hold off a few forward thrusts by the Japanese till morning.

By daybreak, the Brigade Commander, knowing that he was almost surrounded, decided that their forces would retreat south to Reformatory Road where their allies were. They began their retreat by going through the farmland and rubber estate south of Jurong Road. At a rubber estate called Sleepy Valley, the retreating British forces were ambushed by the Japanese soldiers.
You can follow the story of this ambush here at this link.

You may not be able to understand a battlefield map but here is an account of the battle at Bukit Batok from a Japanese perspective and how the Imperial Japanese Army moved through the region. Further to the Japanese map, I have included some illustrations below to explain the battle that took place at Bukit Batok on the night of 10th Feb 1942.

Living below the radar.

Perhaps, because of its ulu remote location, most people would not have heard of or knew where Princess Elizabeth Estate was. Even when taking a taxi in those days, you had to say 'Tien Tor Long' i.e. 'the Eveready battery factory', before there's some semblance of familiarity. Saying Hillview or Princess Elizabeth would simply draw a blank look. It was as though we residents of the estate were living below everyone's radar.

But then, we really WERE living below the radar!  The RAF Radar Station at Bukit Gombak. 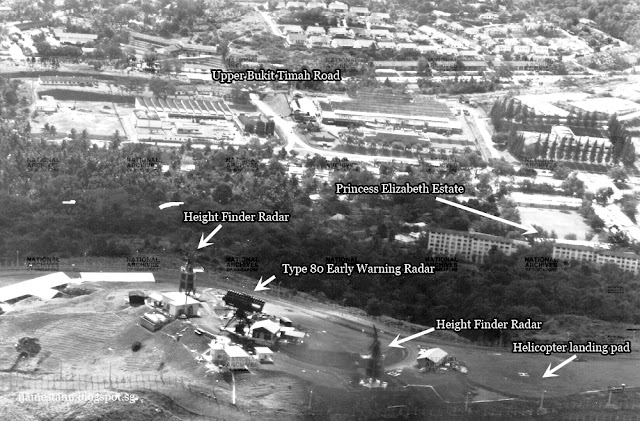 From our flats at the base of Bukit Gombak, most residents could see the radar installation. The Early-Warning radar would be constantly rotating, while the two Height Finders would be tilting up and down, earning it the nickname the nodding radars.

Very frequently, we would also hear a loud whirring sound and the sight of a yellow RAF helicopter coming in to land at the summit.


During World War 2, there were no particular records of any battles on Bukit Gombak itself but it is known that during the Japanese Occupation, a Japanese Army camp and an Observation Post (OP) were built on the summit. It would command the entire view of Bukit Timah Road from Bukit Timah Village all the way to Mandai.


By 1963, the RAF had completed building the radar station comprising the rotating early-warning radar and one nodding height finder radar. A second height finder radar was added to the installation a few years later.  The two nodding radars faced opposite directions.


The radar station was called RAF Gombak. The base was protected by double chain-link fences. It occupied only the top around the summit and was surrounded by small farms!


Most young boys residing at Princess Elizabeth Estate would have climbed Bukit Gombak to the summit as part of their adventures or simply to view the radar installation.

I can remember my own trips to the summit, walking outside the chain-link fence and along the way would stop to pluck the starfruits, buah kelondong, rambutans and sugar cane that grew on the slope. They probably belonged to the farmers!

The radar installation was handed over to the Singapore Air Defence Command, precursor of the RSAF, when the British forces pulled out of Singapore in 1971.
Today, practically the entire Bukit Gombak hill has been taken over by the Singapore Armed Forces (SAF) with several military camps built within the fenced protected zone that stretches all the way from Hillview to Bukit Panjang.

Nowadays, if you look carefully at Bukit Gombak, you might still see something there in place of the old British radar. What are those, you ask? Well, I am not going to risk a knock on my door at 2 am for revealing state secrets, ha ha. Take a trip on the MRT train towards Chua Chu Kang Station and keep your eyes peeled if you want to know.

Email ThisBlogThis!Share to TwitterShare to FacebookShare to Pinterest
Labels: Bukit Gombak, radar station, RAF Gombak
Newer Posts Older Posts Home
Subscribe to: Posts (Atom)
If you have lived at Hillview or Princess Elizabeth Estate, this blog was written specially for you. Join me as I recall stories from the past about the area.
Introduction