The Quarry at Bukit Batok.

I have just come to the realisation that after all these years, I have not written anything about the Bukit Batok Nature Park located at the foothill of Bukit Batok hill.
I had written some articles regarding Bukit Batok Hill in relation to World War Two, and how the memorials on the summit came to be, but not about the Nature Park it seems.
I guess the reason may be that the park is new to Bukit Batok whereas my blog tended to focus on heritage, especially if it was related to Princess Elizabeth Estate in the first instance.

Recently, I posted to Facebook an old picture of Little Guilin, the granite cliff feature found at Bukit Gombak, which is officially called the Bukit Batok Town Park. This picture was that of the old Gammon Quarry after it ended operations and just as Bukit Batok New Town was beginning to be built.


The picture attracted a lot of feedback, especially when I mentioned I also had pictures of the Bukit Batok (Nature Park) quarry before it was made into a park. Friends were asking to see the old pictures of Bukit Batok Quarry. I thought it was already in this blog but when I search back the past years archive, I realised I didn't do an article on it. It was in my other personal blogs. So let me redress this here.

Trivia: By the way, did you all know that the region of Bukit Gombak/Bukit Batok has the oldest rock formation in Singapore? It was first pushed out of the sea by tectonic forces about 250 million years ago. Yes, at the time of the dinosaurs! You can read more about this in my older article here.


Whether or not Bukit Batok got its name from the dynamite blasting by Poh Kim Quarry is highly debatable. I personally do not subscribe to this 'coughing hill' theory. Bukit Batok was already marked out in maps as old as 1906, whereas the quarrying operations there were only after 1945. It doesn't gel, but people will believe anything on the internet!

Anyway, operations at this quarry ended in the late 1970s, when the Singapore government only allowed granite quarrying to be carried out offshore, meaning Pulau Ubin and Pulau Tekong. All quarries on mainland Singapore had to cease operation and facilities torn down and the scarred lands reverted to the government. All the former quarries laid in fallow until some were converted into nature parks by the NParks authorities years later.

Bukit Batok Nature Park was developed in conjunction with the building of the adjacent New Town as a park for residents to enjoy. This was from the mid 1980s onwards.

From 1977 till 1981, the time when the quarry was disused and forgotten by almost everyone, I was working as a vehicle inspector for a car assembly company located at Hillview Industrial Estate.
This was long before Hillview became a condo belt and had light industries instead.
My job was to certify that the cars were properly assembled and fit for the road. Thus, I had to do what was known as road-tests. This was a complete shakedown of the car, testing for loose parts, rattlings or simply bad fittings.  The best way to test for rattles was to drive over rough gravel and the abandoned track to the Poh Kim Quarry was ideal for this as it was covered with granite gravel.

Imagine the looks from other drivers when they saw new cars appearing out from the jungle track! haha.

Following are some pictures taken during our 'breaks' at the abandoned quarry. You can see that by then the mine had already been filled with rain water and the pond was building up with the runoff from the hill.

Unfortunately, I was unable to find pictures only of the quarry (which I probably got rid off long ago) and have only some souvenirs of myself from those times. But you can still see from these pictures, Bukit Batok Hill before it was developed and planted with trees.


The original Poh Kim Quarry track that ran from Hillview Avenue to the quarry was not where today the path to the nature park pond is. The original gravel track is now covered over and overgrown with trees but you can still see some remnants if you look hard enough. It was beside where the heavy vehicle park is today. 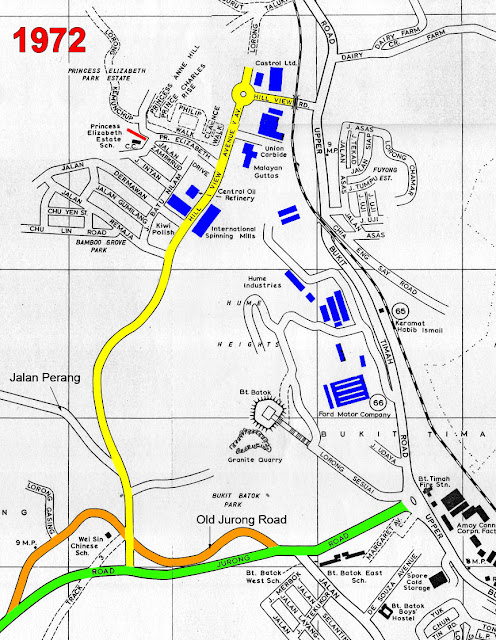 You know your drills?  I thought I did.

I thought I was a competent DIY person.
Afterall, I did M&E engineering, I could weld, use a lathe, fix an armature motor, hell, I was even certified to work on the A4 Skyhawk aircraft! So I thought I knew my drills.
But, time, age and technology had overtaken this old man.

I previously lived in an SIT flat, on a landed property and 30+ years ago moved to a prefab HDB home. All this while I DIY most of my stuff using a power drill. Graduating from a normal power drill (my first Black & Decker) which lasted years till it kaput, I went on to a Hammer Drill (also B&D) which I have till this day. This drill served me so well that I thought of nothing until I moved to a new HDB flat a year ago!

My new HDB flat is a world of difference to my old HDB flat. It has bombproof flooring that is made of High Strength Concrete. I didn't know this till I started some DIY fittings when I renovated my home. My Hammer Drill just could cut it. It couldn't penetrate more than 10mm even with all my might. Previously, my hammer drill could make holes in walls and ceilings in my HDB flat like making holes in swiss cheese.

Luckily at that time, I had renovation contractors and they drilled holes for me using their own tools, which I thought was 'heavy duty' which was why they could and I couldn't with my domestic drill.

A week ago, I tried to install 2 window roller blinds and had to drill 8 holes on the ceiling. Spent about an hour with my hammer drill and it couldn't even make a dent! I didn't even manage a single hole deep enough for the screw. I literally had to force and push my hammer drill till it was smoking and still no go! I had to give up! (missus now angry and threaten this old man with expulsion if I wouldn't get professional contractors in)

So I did what most people would do today. I googled. Found out that I needed a new kind of drill called a ROTARY HAMMER drill. I must admit I have never heard (or never needed to know about) this new drill. Newer HDB flats use concrete that are super tough (bomb resistant) which is why specialised tools are needed to drill into the ceilings, beams or even the bombshelter walls. Older HDB flats used normal concrete.

Not wanting to buy new tools as I hardly do any DIY nowadays, I asked friends.
Managed to get my hands on a borrowed rotary hammer this morning and it was a piece of cake. Drilled all 8 holes in less than 5 minutes. It went through the concrete like butter!

What this old man learned is that today there are different drills from those days when one size fits all.
1. Normal power drills, for drilling and fastening functions.
2. Impact drills, when you need more torque or turning force.
3. Hammer drills, when a bit of hammering is given to the drill bit to make it 'bite'.
4. Rotary hammer drill, where a lot of punch and thrust is generated while turning at high speed. This is specially for concrete. 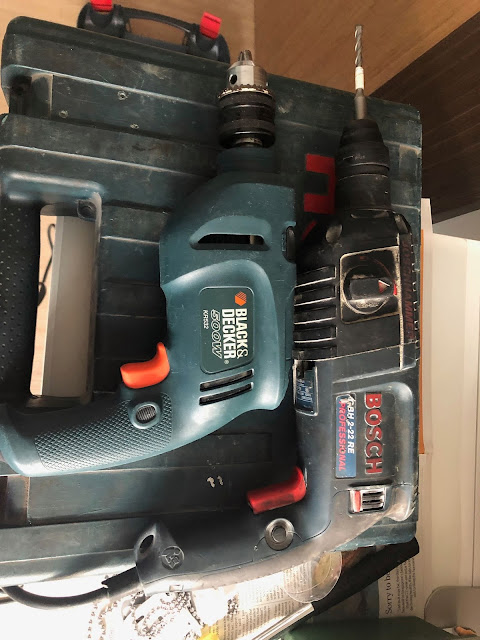 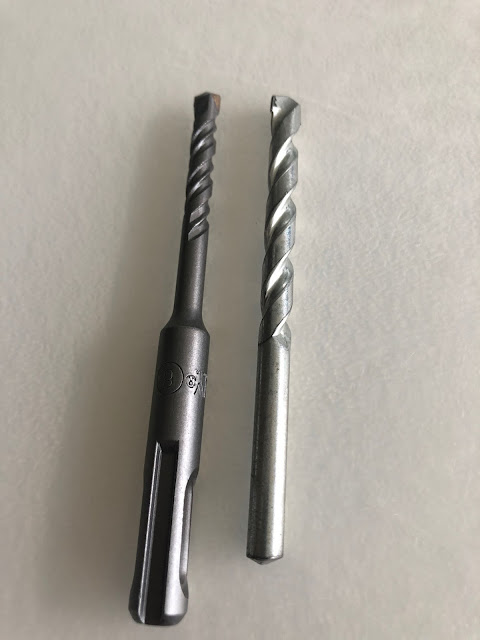 The top picture shows a Rotary Hammer drill (right) beside my 'normal' hammer drill.
You can tell the obvious difference in the 'normal' drill bit and the rotary drill bit.

I hope you learn the drill a bit more now

(Apologies to readers for posting this irrelevant article in this blog. I'll find a better place for it later)
Thanks for visiting.
- August 17, 2019 1 comment:

Email ThisBlogThis!Share to TwitterShare to FacebookShare to Pinterest
Labels: concrete, hammer drills. Power drill, HDB, HDB concrete., Rotary hammer
Newer Posts Older Posts Home
Subscribe to: Posts (Atom)
If you have lived at Hillview or Princess Elizabeth Estate, this blog was written specially for you. Join me as I recall stories from the past about the area.
Introduction