Of course, we all are aware of the fact that the Ford Motor factory became infamous as the place where the unconditional surrender of Singapore took place on 15th February 1942.  GOC Lt-Gen Arthur Percival surrendered all Commonwealth forces in Singapore over to Lt-Gen Tomoyuki Yamashita of the Imperial Japanese Army at the boardroom of the old Ford Motor factory.

The Ford Motor factory was completed and began operation in October 1941. This was just three months before the Japanese Army invaded Malaya. By 10th Feb 1942, the Japanese Army had already invaded Singapore and overran the Ford Factory in their quest to conquer Bukit Timah. It then became the field Headquarters for Lt-Gen Yamashita throughout the Battle of Singapore.

During the Japanese Occupation of Singapore, from 1942 to 1945, the former Ford Motor factory was handed over to Nissan Motor Company and converted for the building and maintenance of military trucks for use in the Japanese war effort.

In 1944, the Japanese military government conducted a census of population and required all citizens to be registered. The Ford factory was the registration centre for people living in the rural Jurong, Upper Bukit Timah, Chua Chu Kang and Woodlands areas.

This photo was published by the Japanese newspaper Mainichi Shimbum in a report of the census of 1944. It is also one of the earliest known photos of the building taken during the Occupation period. 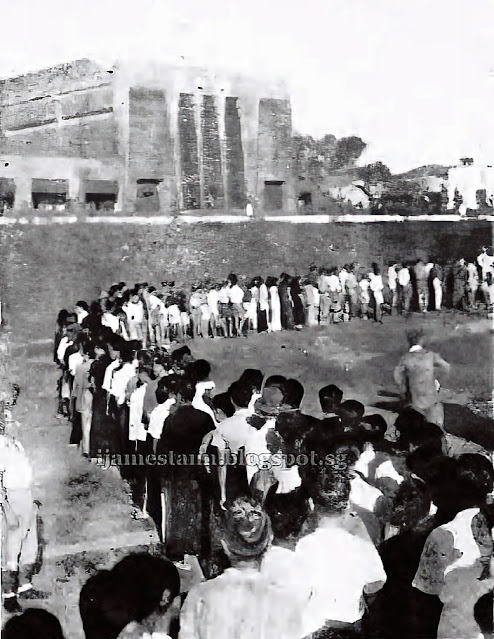 Links to other articles:-
Factories around P.E.E. (Ford Motor)
The Mendoza Village

Email ThisBlogThis!Share to TwitterShare to FacebookShare to Pinterest
Labels: Battle of Bukit Batok, British Surrender, Bukit Batok Hill, Ford factory, Ford Motors, Memories of Old Ford Factory, Population Census
Newer Posts Older Posts Home
Subscribe to: Posts (Atom)
If you have lived at Hillview or Princess Elizabeth Estate, this blog was written specially for you. Join me as I recall stories from the past about the area.
Introduction