Today's generation of school children are so hothoused that by the time they are admitted to Primary One, they would have already had at least a year of nursery school and 2 years of kindergarten. All of them would already be well versed in their ABCs and 123s. All can read and write the alphabet.

Like most of my peers during my time in the 1960s, I learned my ABCs and 123s in Primary One.
Only a few more enlightened or privileged children went to kindergarten.

I can still recall the first time going to school in Primary One, feeling lost in that strange environment and yearning for my mother, who with the other mothers would be peering from outside the classroom windows. My class teacher at Princess Elizabeth Estate School in Primary 1C was Miss Tan Gek Eng.

In the beginning, all the primary one pupils did not have any books.
What we had was a personal blackboard and duster, which we would carry each day to school.
It was on this tablet, that we were introduced to A for Apple, B for Boy and C for Cat.

It was only after we could manage our ABCs on the blackboard that we were given sheets of paper and pencils to begin writing. 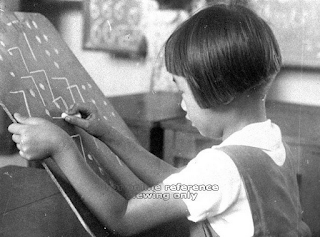 However, the blackboard, which was actually green in colour, was not redundant for us.
We had other uses for it outside of school, the most common of which was to use it as a slide board.

As Princess Elizabeth Est was built on a hillside there were lots of slopes which became our sliding grounds. The best slope was in front of block 20 as it was the longest and had the best angle for sliding downhill. Children could always be seen each evening playing with their old blackboards sliding downhill.

The slope at Block 22 was too flat while the slopes in front of blocks 21 and  23 were too steep and dangerous, which didn't stop the foolhardy anyway.

Occasionally, some children would find cardboard boxes but these were quite rare as the shopkeepers  were reluctant to give it away. Those riding the cardboard boxes always pretended they were 'driving' down the hill.

Email ThisBlogThis!Share to TwitterShare to FacebookShare to Pinterest
Labels: children's games, fun and games, leisure, princess Elizabeth Estate School
Newer Posts Older Posts Home
Subscribe to: Posts (Atom)
If you have lived at Hillview or Princess Elizabeth Estate, this blog was written specially for you. Join me as I recall stories from the past about the area.
Introduction