The Railway lines at Hillview

In my previous article that I posted in July regarding the Hillview factories along Upper Bukit Timah Road, a lot of interest was centred on the two railway lines that ran past Hillview. These were, firstly, the 1903 Singapore-Kranji Railway, and secondly, the 1932 KTM Railway that 'replaced' the 1903 railway line. I must clarify that even though I occasionally write about the railways, I am not a rail enthusiast, nor an expert on this subject, and my writings about them only relate to my blog articles here.

One of my contacts, a local railway expert, Trevor Sharot, had earlier re-discovered and confirmed the existence of a tunnel that was seen in old 1950 aerial photo maps. This tunnel is under the now 'Green Corridor' and is not clearly visible by any and all who trek along this conservation corridor. It is covered by shrubs and overgrowth. I have marked it out in this 1950 aerial photo. I will do a writeup on this tunnel in a future blog article.

Another old friend and railway enthusiast, Peter Chan, also got in touch with regards to the older 1903 Singapore-Kranji Railway. Peter's grandparents lived at the Chestnut area and had seen the building of the 1932 KTM railway that was to replace the 1903 Singapore-Kranji Railway.
More fortuitously, Peter's grandfather had the presence of mind to take photos of the construction in those days, and Peter shared one with me. 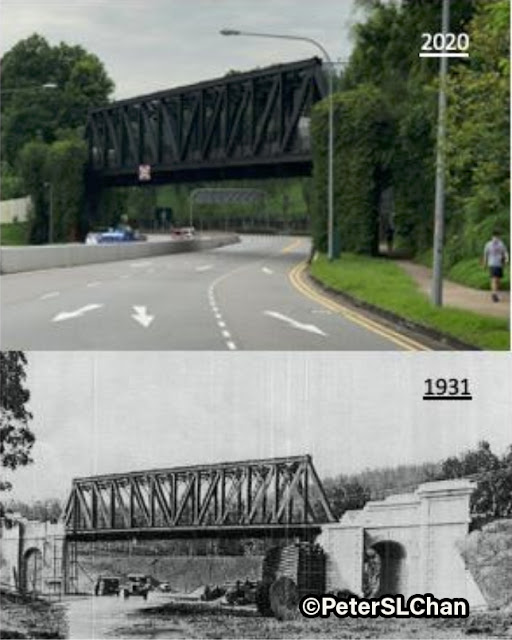 What is interesting about the black & white 1931 photo is that it shows the steel truss bridge being built across Upper Bukit Timah Road in 1931 for the new KTM Railway that would run to Tanjong Pagar. This now retired truss bridge is being conserved today as a heritage item along with the rail corridor.

What is of greater interest in this B&W photo (especially to rail enthusiasts) is that you can see behind the bridge, the level on the hillside where the older 1903 Singapore-Kranji Railway line ran down from the hill (where Ford Motors would later be built). It was on a higher level above Bukit Timah Road.

Note the 1903 telegraph wires up on the bridge level (right of pic).
There also appears to be overhead electrical cables alongside Bukit Timah Road as well. These can be seen beneath and beyond the bridge.
Peter then sent me more photos he had!
These were the actual remnants of the telegraph poles which he found and had kept! 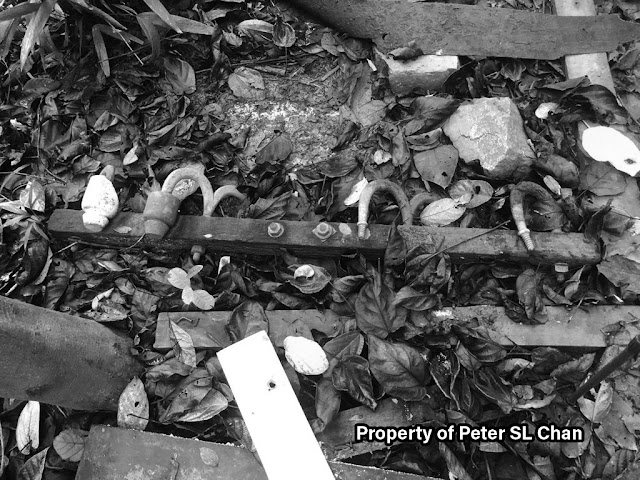 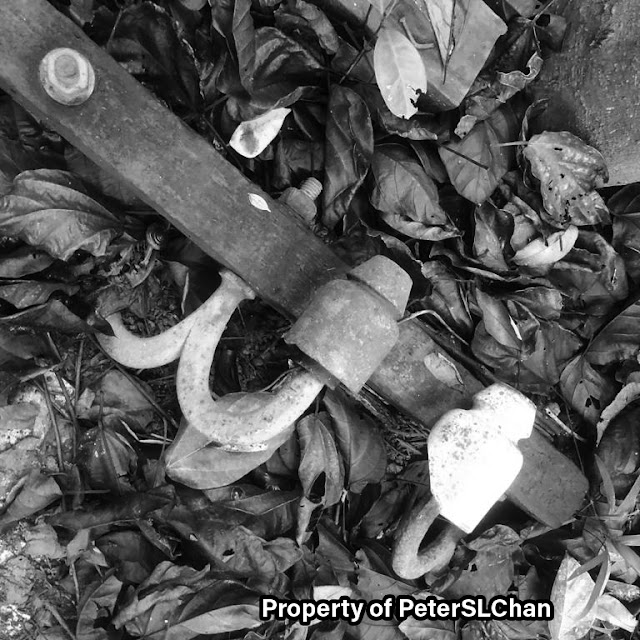 Parts of the 1903 telegraph poles. 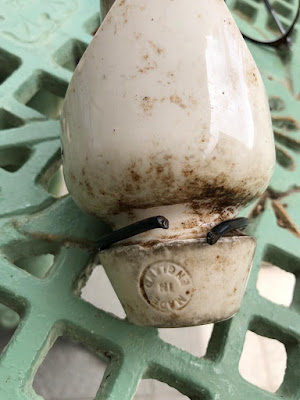 The telegraph wire insulator.
(Peter's souvenir from 1903)
According to Trevor, the 1903 Singapore-Kranji Railway, after passing Bukit Timah Village, had originally been planned to run through the valley that would eventually become Hillview Avenue. That is, it would have been on the western side of Bukit Batok Hill running through the pineapple and rubber plantations located there and onwards towards Bukit Panjang.
However, it was built eventually on the eastern side of Bukit Batok Hill, past Mendoza Village, up the crest (where Ford Motors would be built) and then down towards Hillview. Why the routing was changed is yet to be made clear. Maybe someone out there knows?

Email ThisBlogThis!Share to TwitterShare to FacebookShare to Pinterest
Labels: 1903 Tank Road-Kranji Railway, Aeriel view of Singapore, Bukit Batok Hill, Hillview, Hillview Avenue, history of Hillview, Rail Mall, Upper Bukit Timah Road, vintage photo Singapore, Vintage Singapore photos
Newer Posts Older Posts Home
Subscribe to: Posts (Atom)
If you have lived at Hillview or Princess Elizabeth Estate, this blog was written specially for you. Join me as I recall stories from the past about the area.
Introduction