Recently, I had two friends asked me the same exact question, "Do you know why Bukit Panjang (New Town) was called Zhenghua?"

When I was asked a second time, I said it couldn't have been a coincidence, could it?
So maybe it was time to pen a new article being that it's not too far from Princess Elizabeth Estate?

In a way, I can trace a personal connection to the origins of Cheng Hwa (hanyu pinyin: Zhenghua).
It was located on a road that was named after my father-in-law's uncle who was once the patriarch of the rather well-known Teo family of Bukit Panjang.

Bukit Panjang Village developed just like a typical Malayan highway town in those days, with most commercial shops straddling both sides of the main trunk road (i.e. Upper Bukit Timah Road 10 ms) while the small villages developed behind. It was colloquially known as Tenth Mile or Chap Kor. 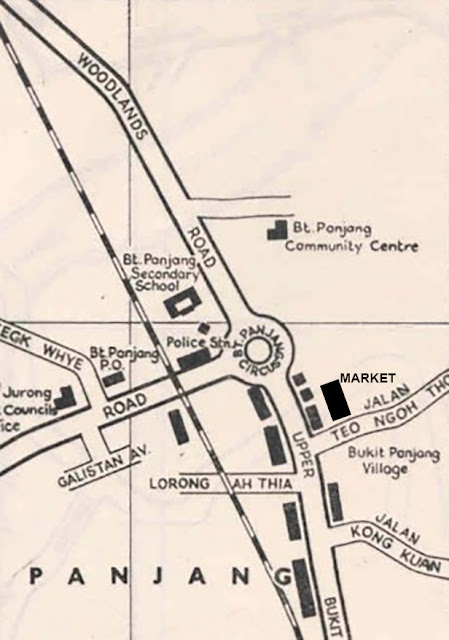 The main market at Bukit Panjang was located at Jalan Teo Ngoh Thong. This region that centered around this market was also known as Kangkar to the mainly Teochew resident families, a throwback to the gambier growing days of the 19th century.
Jalan Teo Ngoh Thong was named after the head of the Teo family who were the prominent clan in the early days of Bukit Panjang Village.


This road, Jalan Teo Ngoh Thong,  was basically a rough gravel track that lead into the farmlands and hill areas further beyond, an area that was called Ya Swa Buay (Beyond the Coconut Hill). This area stretched all the way to the municipal water pipelines that carried water from Malaysia to Singapore's reservoirs.

In 1941, the Chinese community at Bukit Panjang set up a small Chinese public school for the education of children in the village. This school was named CHENG HWA CHINESE PUBLIC SCHOOL.
It was located further uphill along Jalan Teo Ngoh Thong, after the junction with Lorong Petir.

In the mid 1960s (64/65), the road was gazetted as a public road and was renamed as JALAN CHENG HWA, named after the primary school that was the most prominent public building there. This was after government road works were completed to tarmac the track with bitumen and provided with street lamps. By then, the area was already well-known as "Cheng Hwa" by the locals over the years as a result of locality of the school. 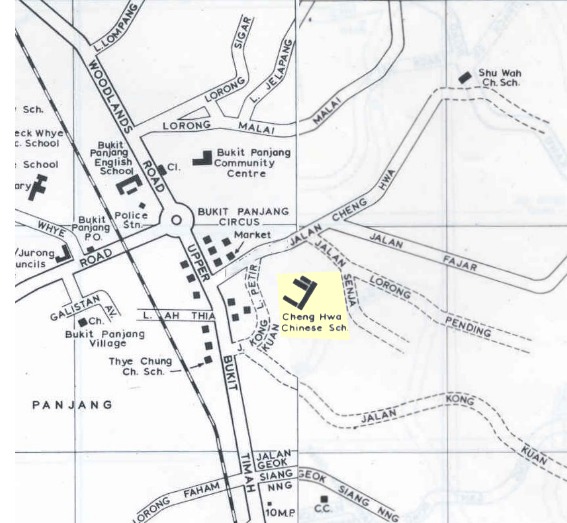 In the early 1980s, the entire region around Cheng Hwa was acquired by the HDB, who proposed to build a New Town to be called Zhenghua New Town.  Zhenghua is the mandarinised translation of the Teochew dialect Cheng Hwa. It was at this period that the government was pro-actively converting dialects names into mandarin hanyu pinyin as part of the Speak Mandarin policy.

However, the rural community were dead set against the change of name and eventually the HDB conceded to the sentiments and protestations and the new town would revert to being called Bukit Panjang New Town. Prof Edwin Thumboo had a part to play in this resistance to the change, which tipped the balance in favour of keeping the legacy name.
(Nearby the CAICUOGANG New Town also reverted back to Choa Chu Kang New Town.)

Today at Bukit Panjang New Town, road names still bear  those of the old village tracks - Fajar, Senja, Pending, Petir and Gangsa. These were the village tracks that led to smaller kampongs within the Cheng Hwa precinct.

Following photos are from the Lee Kip Lin Collection at the National Library, showing parts of Jalan Cheng Hwa and its environ. Unfortunately, I still don't have a picture of the namesake Cheng Hwa Chinese School, even though I have two sisters-in-law who studied at that school.
(postscript: I found and added a photo of the village school in Dec 2019 and have updated this article)