I can still remember when I was just a wee little kid and coming home from outings with my parents.
In my dad's car, we would look out at the landmarks passing by; and of all those I can recall, one stood out because it meant we were nearing home.
As the car climbed and crested the hill at the 8th mile Bukit Timah Road, we would see a big building with the words H-U-M-E surrounded by large circular pipes.

Located just beside the Ford Factory, Hume was the largest factory complex located within the Hillview Industrial Estate. It occupied a sprawling area stretching more than a kilometre along Upper Bukit Timah Road.

Hume Industries started in Singapore back in 1923 manufacturing concrete pipes. It was then known as Hume Pipe Co and was initially located in Katong. It shifted to the Upper Bukit Timah site in 1942 and was renamed Hume Industries. The company continued expanding and branched into other areas like steel pipes and even gas cylinders. It was a major supplier of pre-stressed concrete structures during the years of economic boom and building in Singapore. Most of the expressway flyovers were built on Hume's concrete beams.

In 1983, Hume Industries had a change of ownership and was renamed Hong Leong Industries.
After Hillview was rezoned as a residential district, the factory and its subsidiaries moved to new premises in Jurong. On its old plot now stands five or six major condominium complexes

Many residents of Princess Elizabeth Estate worked at Hume. My immediate upstairs neighbour, Mr Moss, was a manager in the Hume factory. The Moss family later moved to Hume Heights which was then exclusive housing for senior Hume expatriates. 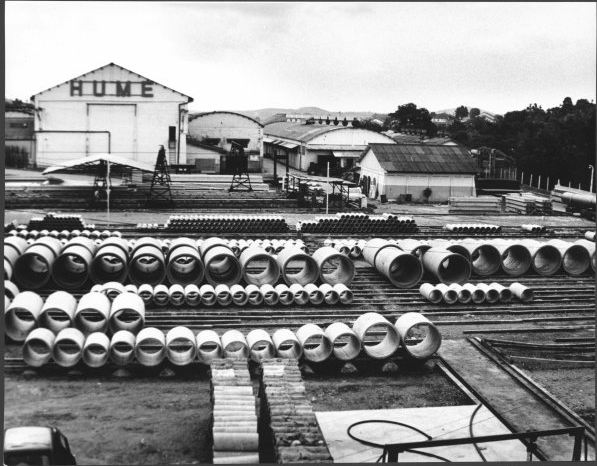 I can recall visiting the Moss' home at Hume Heights and walking past these pipes. I had on occasions accompanied their washerwoman there. We had to walk through the front gate and past the factory to reach Hume Heights which was on a hill beside the factories.

Some of you may even recall the HUME sign (picture left) that was at the main gate. It was prominent being about 12m high and was spotlighted at night.


There was also a very unusual structure at Hume Industries, which many people do not know of.
It once had a windmill within its premises. This was probably used as a turbine generator.
You can see a picture of this windmill at this link.

Up on a hill along Upper Bukit Timah Road near the 12km mark, stands a condominium complex called Bukit Regency. It is situated just opposite the old Bukit Timah Fire Station, directly across the road from what was the former Green Spot factory site.

But long before the area was rezoned for residential use, the hill top was occupied by a rather famous factory. It was called the Magnolia Dairies (S) Ltd factory. 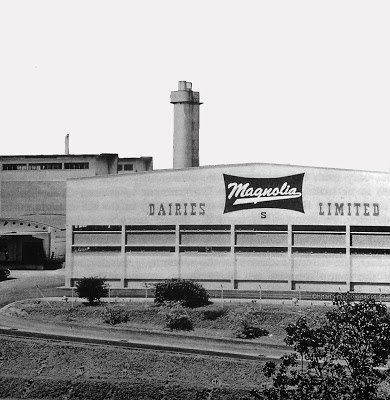 Magnolia Dairies was built in 1961 by the Cold Storage group. It was to be one of the most modern food manufacturing plants in Singapore and cost $1m to build. A staggering investment in its day.

The first product manufactured was condensed milk.
In 1964, it added another new production line and produced fresh sterile milk in bottles.
The raw milk came directly from their own cows that were kept at Dairy Farm, located a short distance down Upper Bukit Timah Road. Their initial run was up to 500 gallons of milk a day.

When I was in Princess Elizabeth Estate School, my parents had an arrangement with the school tuck-shop Magnolia ice-cream seller to supply a small bottle of milk each day for me and my siblings during each recess. The milk came in 2 sizes, a large bottle costing 20 cents and a smaller bottle that cost 10 cents. We were given a small bottle each day.


Many PEES students will remember the Magnolia ice cream man. He was a very short elderly man who always wore wooden clogs (cha kiak). He had to stand on a pedestal he arranged from the milk bottle crates in order to reach into his freezer for ice cream.

I recall that I was supposed to drink a bottle of fresh milk each day but very often I would persuade the ice cream uncle to give me strawberry or chocolate milk instead. My own favorite flavour was the caramel milk but this was only available occasionally.

There was also another Magnolia ice-cream seller who plied his trade within P.E.Estate on his motorbike. He had his ice cream freezer mounted on his sidecar. This Magnolia man was familiar to all the estate residents. He was a round, portly man who was always flush in his face of reddish colour and wore a toppee hat. He was an icon of our estate in his grey Magnolia uniform.


In later years, the Magnolia Dairies factory also bottled soft drinks, squashes and cordials, soya bean and Chrysanthemum tea. I had also assumed that this Magnolia factory made all those Magnolia ice-cream we so loved, but I have it from some hearsay sources that the ice-cream were made elsewhere. The ice-creams were produced by another subsidiary called Cold Storage Creameries. Does anyone know?


How many of you can remember the old delivery vans belong to Magnolia and Cold Storage?
These pictures were taken outside the magnolia factory. 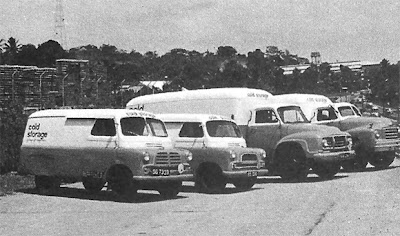 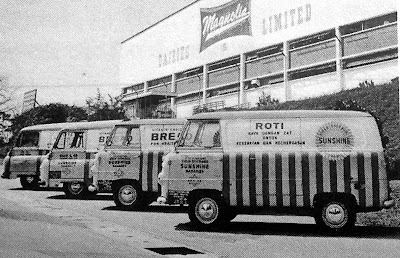 Do you also recall the Magnolia milk in this triangular packaging? 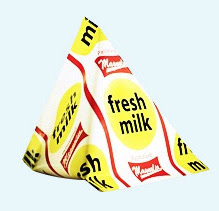 Following my last post on the endangered crabs that used to be found abundantly in our old estate, my friend SK, whom I previously mentioned, sent me some photographs. These photos were taken on the very occasion I mentioned about him taking his children to visit the old PEE site and searching for crabs and fishes.

These amazing pictures show the old large drain next to the old Bukit Gombak Community Centre beside the HBD Hillview Estate.
It is about the only thing that still exist now of the old HDB estate. It still drains the water from the grounds and from the run-off from Bukit Gombak when it rains.

With the building of the 2 new condominium complexes, The Hillier and Hillview Peak, this last refuge of the Johora Singaporensis crabs will soon also pass into history. 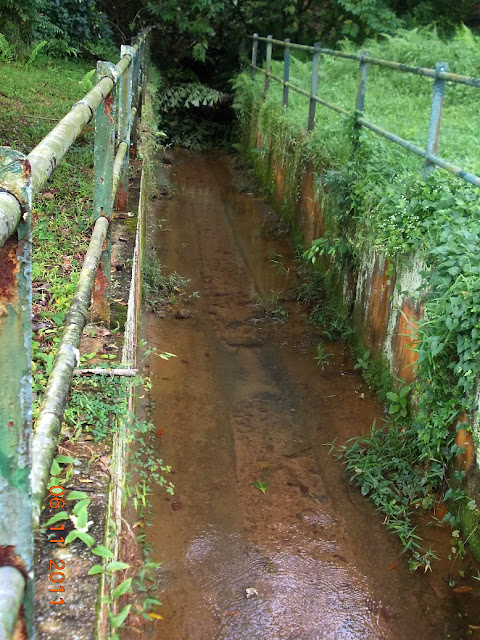 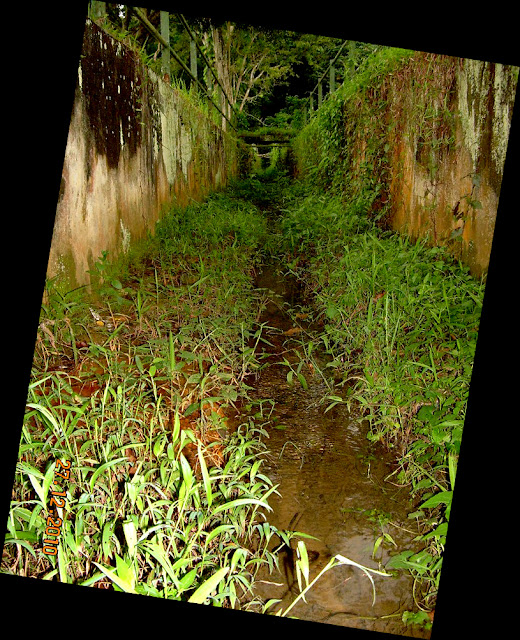 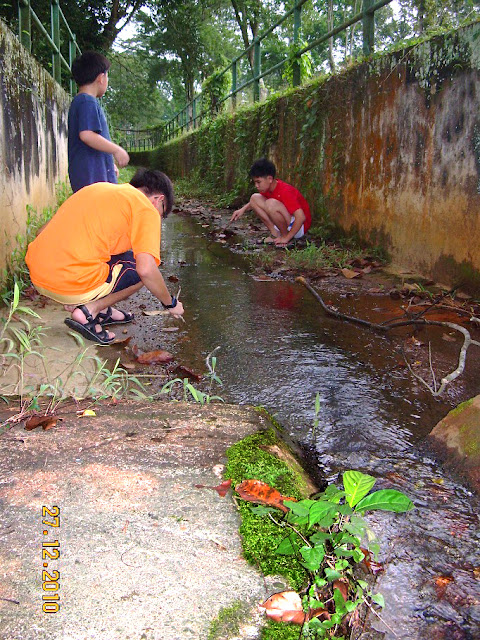 A lot of crabs

Johora singaporensis.
After more than 40 years, I just learned the name of those tiny little crabs that were living in the stream by the old Princess Elizabeth Estate School (PEES). These were the crabs that every boy (and girl?) from Princess Elizabeth would have known (or at least they would during my school days in the 60s).

They were also found in every other stream that flowed from Bukit Gombak down into our estate.
These streams ran through our primary school, through the drain beside the estate big football field, the large stream that ran along Lorong Taluki and in the large drain just outside the Castrol factory .

These were the places where PEE schoolboys and all the estate and kampong boys would spend hours catching crabs, fishes and eels that lived in them. It was a testament to the purity of the fresh water that flowed from the hills.

Of course, at that time, we wouldn’t have known that this species of crab was unique to our estate area.
It was just crabs to us.
In an article in the newspaper today, it was reported that this uniquely Singaporean crab is now an endangered species. Duh? Hello?

It’s such a no brainer as to why this is so.
What was once their natural habitat are now all concrete drains!
Their only hope now lies in the isolated streams of Bukit Timah Nature Reserve and Bukit Batok Nature Park. 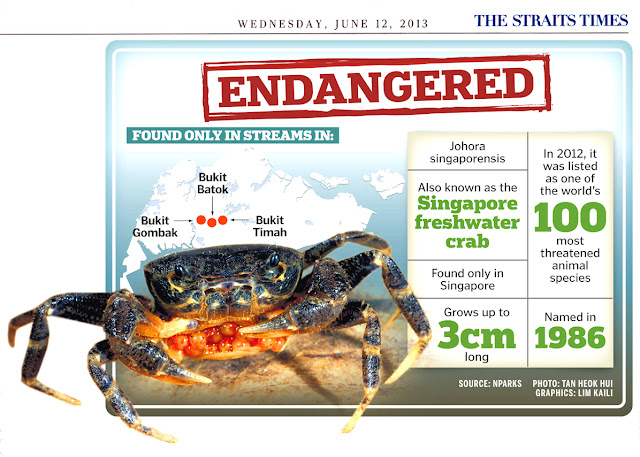 This poor crab, Johora singaporensis, is on the list of the 100 most critically endangered species in the world, and can only be found in the Bukit Timah, Bukit Batok and Bukit Gombak forest reserves in Singapore.

I can recall an abundance of these tiny critters all around our estate in my young days, and because it was small, we were not afraid of catching it with our hands. They would be found under the rocks, which we would gently lift and find them hiding beneath.  A 3cm crab would be considered huge. Most were black but some were whitish in colour.

As I lived beside PEES, it was the stream running through the school that was my favourite fishing spot. I remember hunting for the crabs in the large eddy hole that formed under the bridge to the small school field. Most of the larger crabs could be found further up the stream that flowed down from the hilltop beside this field, where the larger rocks would be found. The stream also had large schools of guppy fish and the occasional prized Tigerbarb fish.

The last time I went to the primary school, a few years ago, I noticed that this stream was no longer there. Instead a concrete drain now runs in its place. I supposed the last few batches of PEES students would not have the chance to play in the stream.

The other location where these tiny crabs could be found in abundance was just outside the school gate, in the drain under the road that led to Jalan Zamrud. I really doubt if any can be found there now.

I recall my ex-estate friend, SK Yum, saying he recently took his children around the empty grounds where once our estate stood and could still find some crabs living in the drains. Alas, these drains would soon too be covered over by the new condominiums being built there. And they lament that the crabs are dying out? Where's the coordination amongst the gov agencies?

There is still an abundance of fresh water flowing down from the springs within the Bukit Gombak hill, which unfortunately is now fenced up as the Ministry of Defence security area.
I am sure the crabs can still be found near the sources of these spring water.

In hindsight, thinking of those young days when I was catching these critters, I recall that what we did would be considered cruel. I remember pulling off their pincers while they were alive to prevent getting bitten...and what else?  We roasted the crabs over fire too. Did we eat them? No, we never dared.
Why we did those things were never a question then.  We were kids growing up in a world where the outdoors and nature were simply part of our leisure.

Here's a photo of a stream at Bukit Batok Nature Park which I took recently. This is like the stream at PEES in my time.
Very likely, there would be Johora singaporensis crabs in it.
So, if you take your kids there, please tell them not to pull the crabs’ pincers off or roast them like Uncle James did when he was young and foolish.


Love them and be one with the natural world. We are losing so much of our heritage at such an alarming rate. 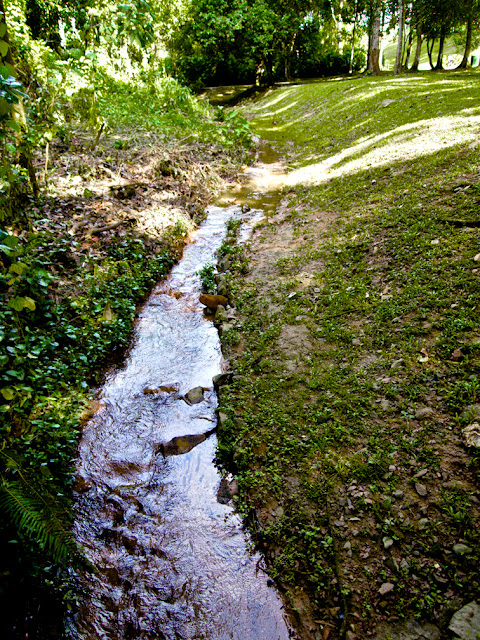 Email ThisBlogThis!Share to TwitterShare to FacebookShare to Pinterest
Labels: crabs. Lorong Taluki, Johora Singaporensis, Princess Elizabeth Estate
Location: Bukit Batok, Singapore
Newer Posts Older Posts Home
Subscribe to: Posts (Atom)
If you have lived at Hillview or Princess Elizabeth Estate, this blog was written specially for you. Join me as I recall stories from the past about the area.
Introduction