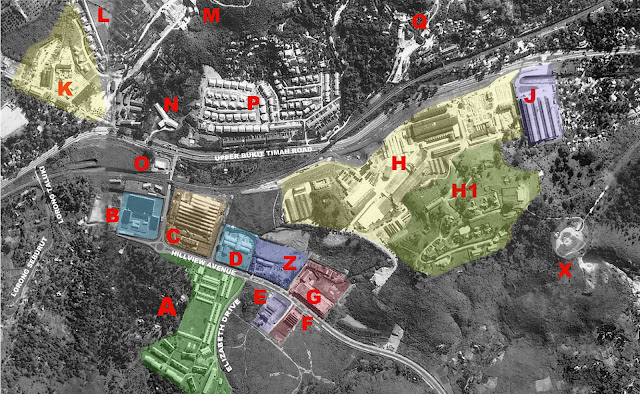 This is an aerial view of the Hillview Avenue area taken in the late 1950s.
Click on the photo to get a larger detailed view.
I have labelled a few prominent landmarks as follows:

I received 2 photographs from an ex-resident who wishes to remain anonymous.
The photos were taken almost a generation apart. Some of the children in the 2nd photo have parents featured in the 1st photo!

If you can identify any of them, please send me a email.
(I hope my friend Lowy can be of assistance here as she seems very good at identifying the ex-residents.)

Photo of staff of National Carbon (Union Carbide) and friends having a celebration at a house at Princess Elizabeth Estate. Taken around 1953.

As a child, I lived at Princess Elizabeth Estate built on the flanks of Bukit Gombak hill.
In my youth, I moved to Fuyong Estate on the slopes of Bukit Timah Hill  before returning to Princess Elizabeth. Now as an adult, I live at Bukit Batok.
This meant that all my life, I have been domicile within an area of less 3 km from each another.
So I am truly a 'swa teng' person and my 'kampong' can be considered as the Hillview/Gombak/Bt Batok & Bt Timah area.

Central to this area is Bukit Batok Hill at 120m high.
As I previously mentioned in other articles, Bukit Batok Hill played a significant part during the Japanese invasion during World War II.

Capturing Bukit Batok and Bukit Timah Hills meant that the entire area came under your control.
In those days, the hills of Gombak, Batok and parts of Bukit Timah were not as forested as it is today.
Capture of these strategic high points meant that you were able to observe and thus take control of movements in the surrounding areas. It was no stretch of imagination that some of the biggest battles were fought between the Japanese army and the British forces for control of this area.


This is the view from Bukit Batok taken around 1960. The view is towards the city in the far background. Bukit Timah Hill is on the left and the Clementi/Holland area on the far right.

Today, the views are all blocked by secondary forests due to the trees planted by NParks during the greening campaign of the 1970s &1980s.
I remember that even in the late 1970s, the view from the top of Bukit Batok was 360 degrees.
You could see the entire Jurong area from one side and also you could also see all the way to Mandai in the north.


So significant was the Battle for Bukit Batok Hill  that the victorious Japanese army built a shrine on the hilltop to commemorate the bravery of those who fought and died there.
This was the Syonan Chureito shrine built on the summit.
They also allowed the British to erect a smaller memorial cross nearby to honour the British soldiers who perished in the battle.


Nothing remains of the Syonan Chureito shrine today except for a recent heritage marker erected on the steps leading up to the summit.
Bukit Batok Hill is now part of the Bukit Batok Nature Park with the prominent Mediacorp TV broadcasting tower as its landmark.


In May 1963, together with all my schoolmates from P.E.E.School, we were lined up along the roadside of Princess Elizabeth Drive (now known as Elizabeth Drive).
We each were given a tiny little triangular flag made of coloured crepe paper on a bamboo stick. We were supposed to wave our flags as hard as we could when given the cue by our teachers.
The occasion was the formal visit of the then Prime Minister, Mr Lee Kuan Yew, to our little estate.

It felt like we had stood by the roadside for hours, fidgeting and being constantly scolded by our teachers, telling us to keep our positions and 'shut up!' It was all a big show because when the convoy did arrive, it passed us without even slowing down.

The only happy thing I still can remember about this occasion was that after the convoy passed, we were trooped back to school and each given a small pink and brown layered cake and a bottle of Green Spot!

I was then too young to realise any significance of that ministerial visit.

The PM visited Princess Elizabeth Estate as part of his 1963 constituency tours to soft sell his idea of the merger of Singapore with the Federation of Malaya. Beside the politics, he was also there to lay the foundation stone for the new community centre built by the People Association. The new community centre was located in front of block 17, beside the bus terminus carpark.

This is a montage of some thumbnail pictures of that visit. Sorry for the low resolution.
You can see the PEES schoolchildren lined along Elizabeth Drive in the left photo on the third row. 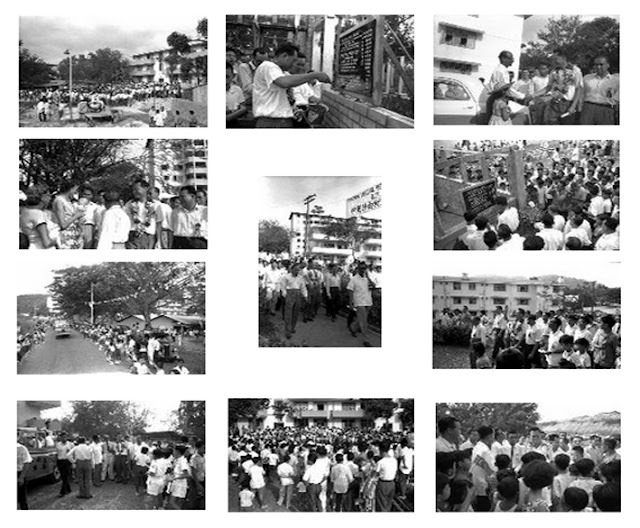 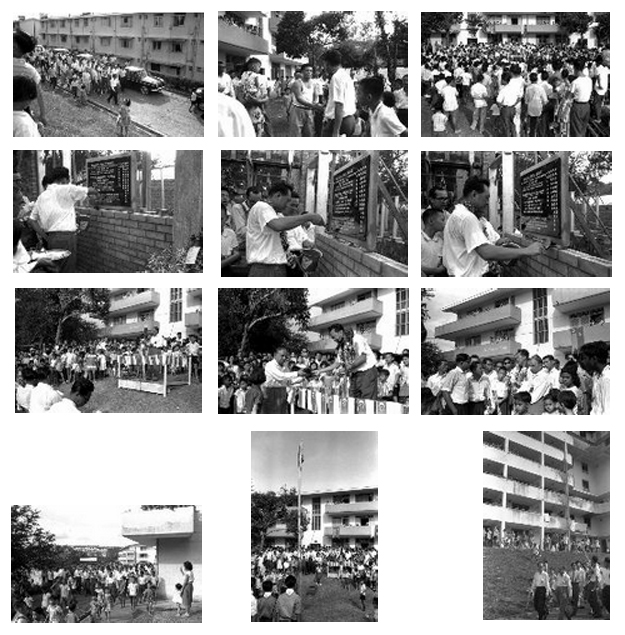 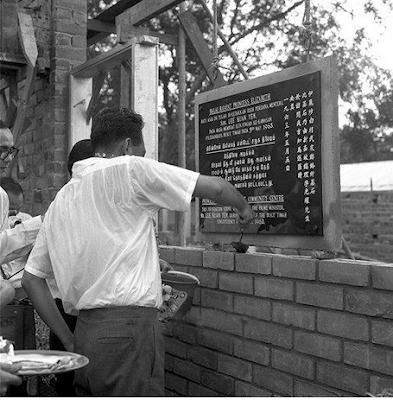 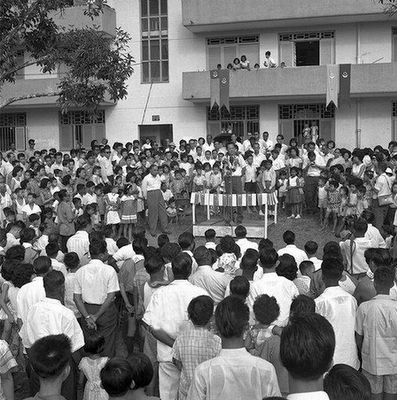 The Hillview branch of the Standard Chartered bank has been located at its present site at the junction of Upper Bukit Timah and Hillview Road since 1957. 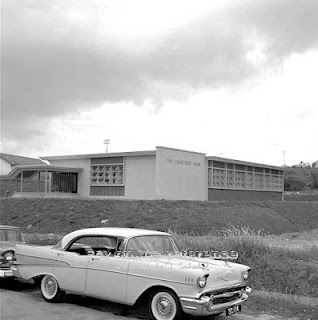 It was truly a remarkable landmark in the 'rural' area at that time.  Because it was located beside the KTM railway land, there were no other buildings along the entire Upper Bukit Timah Road stretch from the 8ms (12 km) Hume factory onwards until the 10ms (16km) at Bukit Panjang. It was the only masonry building for the entire stretch on that western side of Upper Bukit Timah Road! It sat on the only plot that did not belong to KTM Railway.

The only other structures were the occasional squatters and shanties built on the KTM railway land itself, probably without permission. I remember that there were 2 houses directly opposite the bank on the other side of the junction of Hillview Road. These were occupied by Indian families who had set up foodshops as part of their homes. Further down Upper Bukit Timah Road, there was a bicycle shop and a provision shop located opposite St Joseph Church. These were also squatters together with some other homes and had been there quite a long time.

Unfortunately, the isolated position of the Hillview Standard Chartered Bank also made it a favorite target of criminals. This little bank holds the reputation for being the most held-up bank in Singapore!
I believe it was connected with at least four robberies but personally I can only remember the last 3 times it made the news.

The last time it was held up was in March 1980 when 3 malay men fired off their weapons in the process of robbing the bank of $40,000. Two of the bank staff were injured but fortunately not fatally. The 3 men were later captured and extradited from Malaysia and were sentenced to jail from 10 years to life imprisonment for the one who fired the gun.

In 1974, two men from the nearby Rheem Hume company were robbed just leaving the bank after withdrawing the company's staff wages. In this incident, the robbers had also fired guns during their getaway. The robbers too were eventually caught, sentenced and imprisoned.

The earliest robbery at this bank was in 1964. Similarly as in the later 1974 case, three armed robbers ambushed and snatched $30,000 from the staff of Gammon Malaya Ltd who had just withdrawn the monthly staff wages from this bank.


There has been no reported incidences at this bank since 1980 and today the bank still stands where it is. The new Hillview MRT station is being built just adjacent to the bank.

I passed the bank just today and wondered if any more robberies will occur here, especially now when the MRT works are in progress. The bank is almost completely hidden from view due to the construction works!