The Twin Towers on Bukit Batok

Each morning as I awake and draw the curtains in my room, I get to see this sight.
The twin towers on Bukit Batok. 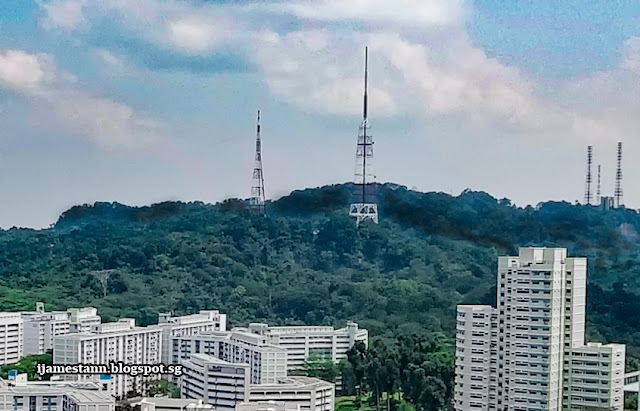 Having lived most of my life in this area, it has become like a symbol. A symbol that tells me that I am home. If you have passed through Bukit Batok East, Hillview or driven along Upper Bukit Timah Road, you surely can't miss this iconic landmark as it's been there for as long as most people can remember. Only a few of us, the oldies now, may be able to remember a time when the towers were not yet erected.

Most people will know it as the television transmission towers belonging to Mediacorp and some will know that it was the location of the Japanese War Memorial a long time ago. Some will simply know that it's where Bukit Batok Nature Park is.

My earliest recollection of Bukit Batok hill would be of the early 1960s. My dad would drive the family to the top of the hill whenever there was a fireworks display in town. This happened occasionally but on what special event days I can't now recall. From the summit, you could see all the way to the city, and people would gather at this hill top, sitting on the steps, watching the fireworks display far off in the distance.


We young kids would be running around the summit which was a flat top. To us it was simply a playground. We had no inkling whatsoever of the significance of that flat top. All I can still remember was that we could see all around in every direction. 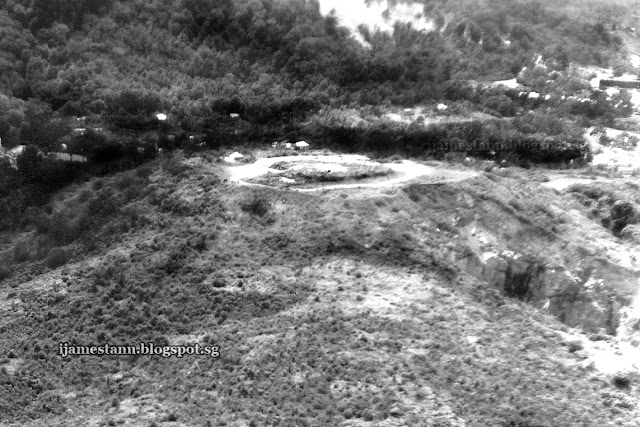 This was the Bukit Batok hilltop in 1958. You can see the flatten summit from which we would watch the fireworks in later years (top centre circular feature). There were hardly any trees tall enough to block the panoramic view.

Of course, we now know that the hilltop was the location where, in 1942, the Imperial Japanese Army built their war memorial shrine called the Syonan Chureito. The shrine contained the ashes of their fallen war comrades. All the Japanese soldiers were required to attend the annual Yasukuni memorial service there. (link here to the Syonan Chureito memorial). There was also a British Memorial Cross erected behind this shrine to honour the fallen Allied soldiers who died during the war. Both memorials were dismantled in 1945 when the Japanese Army surrendered to the Allied Forces.


In 1962, in preparation for the introduction of television service in Singapore, a new signal transmission tower was required as the equipment at Caldecott Hill was unable to completely cover the island. Bukit Batok hill was chosen as the site for the new transmission tower. It was to be built over the same spot where the Japanese shrine once stood.

The site became known as the Bukit Batok TV Transmission Station.  It made its first ever transmission on 15th February 1963 broadcasting in black & white a feature programme called 'TV looks at Singapore' produced by TV Singapura. There was only one channel then, Channel 5. By November 1963, a new channel called Channel 8 was added to broadcast mainly programmes in Chinese.

In 1965, when Singapore gained independence, the TV station was renamed Radio & Television Singapore (RTS) and thus the broadcasting tower at Bukit Batok came to be called the RTS TV Tower. The tower was used for an additional FM Radio service broadcast in 1967.


In the above 1967 photo, the road leading up to Bukit Batok was truncated and diverted due to the construction of Jurong Road (bottom left) to meet Upper Bukit Timah Road (bottom right). The road to the summit was then named Lorong Sesuai. It was previously unnamed or simply called Hume Heights, which was actually the street at the top leading out from Hume Industries.  The kampong at the base of Bukit Batok beside Lorong Sesuai was Kampong Mendoza.


However, here is something that may surprise most of you!
There was a time when there were THREE towers on Bukit Batok hill.
I remembered that I had once really seen three towers but then noticed only two towers later.
It was so long ago that I myself became unsure whether I had really seen three towers. Was I mistaken? So I searched and searched the records but found nothing, until.....bingo!

So it seemed that by 2003, the original 1963 tower was in a bad state of corrosion after more than 40 years of service. It was determined that it would become unsafe in the coming years and needed to be replaced.
In order to ensure that broadcasting was uninterrupted, a temporary tower was built to provide transmission while the main tower was taken down and the new replacement tower built. Thus, for a short period of time, Bukit Batok had triple towers.
Construction of the replacement tower took place in 2005 and was completed by July 2006.  The new upgraded tower began transmission at midnight, 14 July 2006. The original 1963 tower was scrapped after being dismantled.