Of Udaya and the Mendoza Cafe.

Quite recently, with all the talk about the Green and Rail Corridor proposals by NParks Singapore to preserve what's left of the natural space vacated by the KTM Railway,  the Urban Renewal Authority (URA) published a pictorial map of a proposed plan.  This was the upcoming linkage between Bukit Batok Hill to the Rail Corridor, near the old Bukit Timah Fire Station.


When I saw this, I said "Ah, this is something for my blog. Something people will not know about unless they are in their 60s or older now and lived around Upper Bukit Timah!"

This 'something' is the large plot of land between Lorong Sesuai (the road leading to Bt Batok summit) and Upper Bukit Timah Road (up to the former Ford Factory).

This was the location of one of the last kampongs in Singapore. It was colloquially known as the Mendoza Village with its single road, Jalan Udaya. By the 1970s, the village had more than a hundred kampong houses within the precinct, but was completely obliterated in 1985 under Singapore's plan for the removal of all squatters and kampongs. However, the kampong was not technically 'squatters' until after the land was re-acquired by the government.

The site was until then owned by the family of a certain Mr. Joseph Png Swee Thong.
Joseph Png was a wealthy landowner who own large swathes of land in Bukit Timah and Bukit Panjang from the 1920s onwards. He also owned the stretch beside the KTM Railway line from the Bukit Timah Fire Station up to Kampong Merpati opposite the Ford Factory.

This is a map produced in 1972 showing the area of Mendoza Village with its only paved public stretch of Jalan Udaya for access. Within the village, the roads were unnamed tracks. It was located immediately south of the Ford Motor factory on the eastern slope of Bukit Batok hill.


Why was it strangely called Mendoza Village? And what was the meaning of Udaya, the name of the only road way into the village.

Mendoza Village, or Kampong Mendoza, was named after Clement Mendoza. Clement Mendoza was an Indian Eurasian descendent of the Mendozas from Mangalore, India. In 1925, Clement Mendoza married Miss Agusta Png, the daughter of Png Swee Thong, who was the landowner. Ahh, you say!
Mendoza lived at a shophouse fronting Upper Bukit Timah Road. It was an eating-shophouse selling food and drinks. They collected rent from tenants who built their kampong houses there and was in fact the de facto landlord for the village. The village, with its Eurasian name, had mostly Chinese tenants but there were many Malay and Indian families who built their homes there as well. Within the kampong, there were also a few provision shops. One was ran by an Indian and another by a Chinese who named his store Kedai Beng.

During World War II, British prisoners-of-war (POW) were forced to work at the Ford Factory. One group of POWs were from the 1st Leicestershire Battalion. They were made to build fences at the Ford Factory. Private Tom Sansome, a former POW, recalled that after toiling at the Ford Factory, they had to marched down from the factory to MacArthur POW camp at Reformatory Road. However, they were allowed to stop at the 'Mendoza Cafe' for refreshments before the start of their return march. "It was a small shack adjacent to the factory fence that we had built", recalls Pte Tom Sansome.

In 1958, the Malayalee community around the area started a library to promote reading amongst the Malayalee workers who worked at the nearby factories of Hume, Ford, Gammon, Union Carbide and the nearby granite quarries. They registered an association called the Kairali Library and used a kampong house in the village for this purpose.

In 1959, on his victory lap around Singapore, the Prime Minister Mr Lee Kuan Yew, stopped at the village to thank voters for his party's victory at the 1959 General Election. Mendoza Village was a staunch Party stronghold then. He paid a visit to the Kairali Library and when he was told that the 'road' outside the library was unnamed, Mr Lee declared that it would henceforth be called Jalan Udaya. By 1965, it was officially in the government street directory.
Udaya, a word with religious connotations, in Sanskrit or Marathi means 'growth' or 'increase'.

When Mr Chor Yeok Eng became the MP for Bukit Timah in 1966, he based his Citizens Consultative Committee (CCC) at a kampong house in this village across the road.

The entire estate owned by the Png family, said to be approximately 75 hectares in area, was acquired by the government in the 1980s. It was rumoured that the compensation to the landlord was $2m at that time. The kampong folks were offered flats at the upcoming HDB Hillview Estate at Hillview Avenue. The Kairali Library with its collection of Malayalam books was offered space to display its books at the new Bukit Gombak Community Centre at Hillview Estate. It was later given a room at the Education Centre set up at Blk 11 Hillview Estate.
The kampong was completely demolished by 1985 and Upper Bukit Timah Road at that area was widened to improve traffic flow.

In the late 1960s, I had to travel to school by bus passing the Mendoza Village to and fro, and I can still recall the Mendoza eating-shop facing the roadside. This was because my regular Indian barber had shifted his shop from Fuyong Estate, where I was living then,  to set up his new shop beside the 'Mendoza Cafe'. I believe they had partitioned the food-shop to rent the space to the barber.

Here is a very interesting overhead aerial photo of the area (you must have concluded from my blog by now that I'm an aerial photo fanatic!). This was from 1950 when the RAF did aerial surveys of Singapore Island.
In the photo you can see the Mendoza village beside the Ford factory building. You can also see the summit of Bukit Batok with the foundation base of the Japanese Chureito Syonan memorial still in existence then and the little Allied War Memorial behind it.
(Click on the picture for an enlarged detailed view) 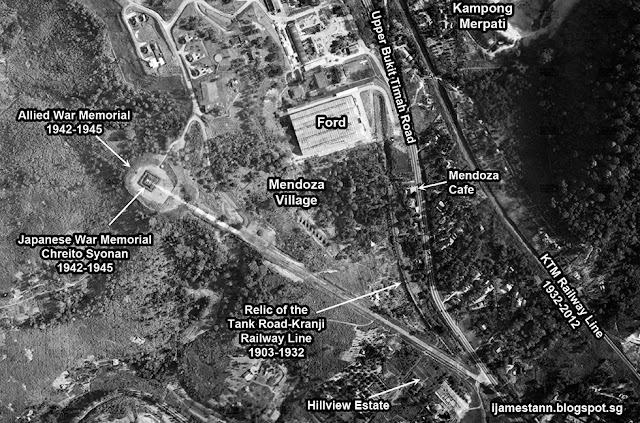 In this picture, you can also see the relic of the original Tank Road-Kranji Railway line that ran right through Mendoza Village. Dismantled in 1932, the mound on which the railway sleepers were laid can still be seen today if you search and look closely.
I was there about two months ago doing bird photography and could still see some remnants of the mound. (oops, did I just give away my secret birding spot?)

Heritage hunters may want to check it out as this is about the ONLY place where you can still see the original 1903 Tank Road-Kranji Railway line left today.
You can also see the colonial 'Hillview Estate', the namesake for the future Hillview region, at the bottom of the photo.  To learn more of this country estate, click on the related link below.


Postscript: addendum to this article 26 October 2019.
After publishing the above blog article, I was contacted by members of the Mendoza family (Anne and Thomas) with whom I had no previous contact, expressing their thanks for highlighting their family history with regards to the Mendoza kampong. They also gave me permission to publish their private family photos here.
Anne also confirmed that the Mendozas were the landlord, and that she remembered that as a little 9-year old child, she accompanied her aunt, Ah Yee, around the kampong to collect rent from the tenants.


Postscript 2:
I also received from a friend from the UK, WW2 researcher Ken Hewitt, a picture of the ex-POW, Tom Sansome whom I mentioned above. Tom Sansome just celebrated his 100th birthday last month.