Last week, I visited an old friend, Jerome Pang. He has one of the most interesting, if not rare, jobs in Singapore. He is an archivist in a private archive; classifying, restoring and preserving old documents and records.
He surprised me by saying "I read this book on Charles Darwin and were you the James Tann mentioned in it?"
"What? Me? In a book about Darwin? Who wrote it?"
"A professor or something named Van Wyhe"

Then I recalled!
Dr John Van Wyhe is a Senior Lecturer  at the Depts of Biological Sciences & History at NUS.
He is the foremost authority today on the life of Charles Darwin as well as Darwin's contemporary, Alfred Russel Wallace.

It was about Alfred Wallace that we corresponded with each other about a year ago.
At that time he told me that he was completing his book and was interested in what I wrote about Wallace during his stay at Bukit Timah in 1854.
Also there was a bit of confusion over the actual St Joseph Church building that Alfred Wallace lived at during his exploration in Singapore. I knew it to be the 2nd reconstruction whereas Dr Van Wyhe could only find references to it being the original. He was also interested in the 1852 map of Singapore which I sourced from the UK archive which he had not seen before.

Dr John van Wyhe has since published his book titled: "Dispelling the Darkness : Voyage in the malay archipelago and the discovery of evolution by Wallace and Darwin" 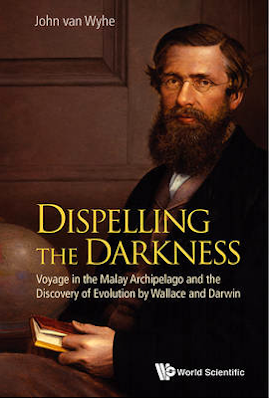 Intrigued by why my name would be in his book, I made a quick trip down to the National Library and found that the book was only available as reference material at the LKC Reference Library.

The book is an easy read for a scientific tome and has quite a good anecdotal account of the events relating to Wallace's jaunts around Bukit Timah. Then I found my name...

Aahh, it was an acknowledgement by Dr van Wyhe to all those who provided 'help' in contributing to his book. It's nice to have your little name amongst the so many famous contributors, although I really didn't think I contributed much. Thanks Dr John van Wyhe. 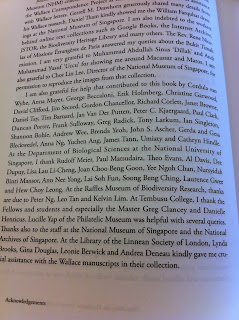 For those of you who may be still, up to now, wondering who Alfred Wallace is (unforgiveable!),
here is a primer from an earlier blog I wrote.
Alfred Russel Wallace in Bukit Timah

As a young schoolboy, I spent many hours exploring the hillside of Bukit Gombak.
Occasionally with my schoolmates but most of the time it was with a boy named Cheng Ah Bah.
Ah Bah was the son of my family washerwoman (that's right! no washing machine in my time!)
Although he was just a few years older than me, the strange thing to me then, was that Ah Bah didn't go to school as we did.  Ah Bah worked on his family farm up on the slope of Bukit Gombak.

Ah Bah would take me all around the Gombak hillside, to the different chicken and pig farms and showed me which fruit trees belonged to which farming family in that area. There were lots of durian, langsat, starfruit, sugarcane and rambutan tree plantations on the hill.

There was a structure near the summit that had a special significance, although at that time, it was nothing more than just a playground for me. This was a small concrete bunker-like building, which my estate friend Johar Anuar and his buddies used to called the "Fortress".  Most of the old kampong boys knew about it but it was not very accessible as the 'jungle' had grown around it.

In hindsight, I now know that this was the old World War 2 Japanese pillbox built during the Japanese Occupation of Singapore. It was still there in the 1960s when the British forces built RAF Gombak Radar Station on the hilltop. This pillbox was near the source of the spring water that till today flows down Gombak towards Hillview.

This is a view of the summit where RAF Gombak Radar Station was sited. You can see the double security fence surrounding it. I can distinctly remember till this day trekking along the fence.

The bunker would be somewhere near the spot marked 'X" which was beside the source of the natural spring. Princess Elizabeth Estate was built right below this hill slope (right).
This old bunker and the spring source are today within the secured boundary of Mindef and there is absolutely no access anymore for ordinary folks like us.

This reminiscing of Bukit Gombak came about as I recalled how my grandfather had told me, long long ago, that during the Japanese Occupation (1942-1945), the Japanese Army had built a camp on Bukit Gombak.
This triggered my memory of Cheng Ah Bah, who once told me that there were more bunkers around Gombak Hill similar to the one we had played at.

Then it struck me like a light bulb going off ! My Eureka moment!

A while back, I had blogged about the hidden lake of Bukit Gombak.
When I was writing that, I recalled my blogger friend, Andrew Him, with his friends who formed a group called One North Explorers, had visited the lake previously a few years ago and found a destroyed concrete structure near the lake.

Was that concrete structure they stumbled upon one of the old Japanese pillbox?
This was highly possible.
At that time, Andrew and his friends were not able to positively identify the abandoned structure.
In the RAF Gombak photo above, the structure would be located just outside the bottom right corner, near where the hidden lake is today.

This will be my next quest. To find and try to see if that structure could be one of those WW2 Japanese pillboxes that were built around Bukit Gombak during the war years.
I will wait till the dry season around next February or March to make this expedition.
I hope to gather some like-minded friends willing to explore with me. Anyone? Drop me a comment with your email contact.

Email ThisBlogThis!Share to TwitterShare to FacebookShare to Pinterest
Labels: Bukit Gombak, Princess Elizabeth Estate, RAF Gombak, War relics, WW2
Location: Bukit Gombak, Singapore
Newer Posts Older Posts Home
Subscribe to: Posts (Atom)
If you have lived at Hillview or Princess Elizabeth Estate, this blog was written specially for you. Join me as I recall stories from the past about the area.
Introduction