I am really encouraged and appreciate the responses from readers to this blog.
I recently received 2 photographs from ex-residents of Princess Elizabeth Estate.

The first is from Anne Moss who used to live at 126A Princess Anne Hill.

The photo is of an event most probably held at the primary school in the late 1950s.
(Blackboard in the background and guests sitting on staff chairs)
Only a few in the group have been identified and if you recognise any one else, I would be most pleased to hear from you. 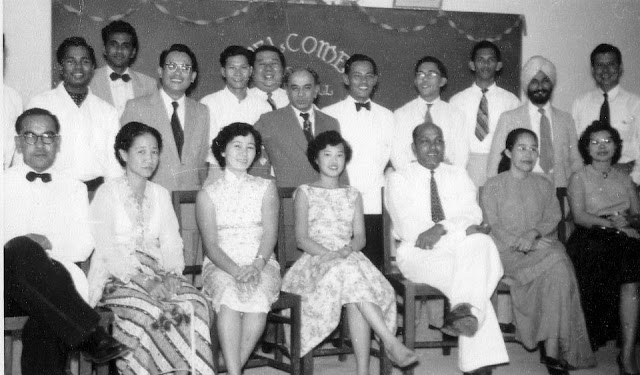 The gentleman seated 3rd from right is Mr Ponnusamy, the first Principal (1952-1959) of PEE School.
Anne's parents, Mr & Mrs Moss, are on the extreme right (seated and standing behind)
Front row seated extreme left is Mr Barkar. Standing back row 3rd from left is Mr Lawrence Chia.
Gentleman in gray suit in the middle standing is Dr Raja from the Raja Clinic.
The bibik in the kebaya, 2nd from left) is Mrs Ong Thye Watt with Mr Ong standing behind (in grey suit)


This 2nd photo is from Brenda Phua, taken on the day of their 1st Holy Communion.
Photo was taken at the verandah of their flat. 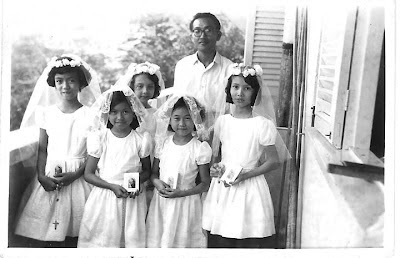 Our Park is missing !

Princess Elizabeth Estate seems notorious for losing its stuff.
The Tong Liang House virtually vanished overnight.
Our football field was partially lost when Hillview Estate encroached onto it.
(The HDB built a car park over it!)

But the one thing that was taken away from Princess Elizabeth Estate without most residents noticing was the loss of the Park!
It was done so subtlely that a whole later generation who grew up at P.E. Est. were not even aware that there was formerly a Park.
What I am referring to is not actually a piece of greenery but the official name of the estate - Princess Elizabeth Park.
The loss was tantamount to a re-identity for the estate but few knew or even cared.

When the Singapore Improvement Trust (SIT), the predecessor of HDB, constructed the estate, it was one of a pair of estates that were built in commemoration of the royal wedding of 1947. The other estate was built at Farrer Park at the old Race Course Road area. The Princess Elizabeth Estate at Farrer Park (pictured above) was demolished by 1978 and was replaced by new HDB flats in the area now known as Pek Kio. 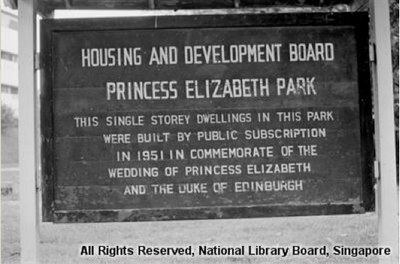 When the HDB built Hillview Estate beside PEE, they moved the signboard to a new location at the boundary between the 2 estates (beside the PEE football field).
However, the HDB made some changes and in place of the original label Singapore Improvement Trust, they wrote "Housing and Development Board" on that heritage sign.  sigh. Sadly, they also made some grammatical errors with the new signboard.

Cradle of faith at Hillview

In today's Sunday Times, it was reported that the Eastern Orthodox Church had appointed a new bishop, Fr Konstatinos Tsilis, to look after the growing Orthodox Church population in Singapore.

I had known that the Orthodox Church had been using rented premises from the Roman Catholics somewhere in Serangoon, but what surprised me was finding out that a 2nd congregation existed right here at Hillview Avenue.
So I did a google and found out that they are established at Jalan Dermawan. And something else more interesting, they are located by the haunted Hillview Mansion that I had blog about earlier!  Well, if any paranormal hunters visiting the Mansion need an exorcist quick, they are in luck! just kidding.


In fact, you may be surprised to learn that Princess Elizabeth Estate and Hillview were the roots of some established churches in Singapore.

In the very early 1950s, a group of Finnish Missionaries were evicted from China by the Communists. They came to Singapore and were given a shophouse at Princess Elizabeth Estate by the SIT to establish a 'church' for their missionary activities. Just to clarify for non christians reading this, a 'church' does not necessarily mean a building.

I do not know of this Finnish Missionary group myself, being too young then, but my mother remembers this group of ang mohs who went around singing and preaching. They always appeared happy and willing to converse. My mom remembers they could speak Chinese though not the Teochew or Cantonese which most PEE residents spoke.

This is just based on hearsay but I heard that their success was also their downfall as some colonial 'powers that be' did not see their activities based in SIT shophouses as proper. Their lease was not renewed and they moved out of PEE. They were said to have gone to Tiong Bahru where eventually they helped set up a church there (Zion Road Free Gospel Church).


Another church that started out of PEE was formed by a group of friends.
One of them being my ex-classmate Tay Buan Tiong. Buan Tiong was in PEES and his mother ran the yong tau foo stall at the  school tuckshop. We both went to the same secondary school but he later transferred to another technical school during secondary two.
At this technical secondary school, Buan Tiong and some friends became fervent christians and started proselyting. They went around PEE with their bibles trying to get people to hear their message of salvation and succeeded in gathering a large congregation. I believe that they met for worship at a house somewhere also at Jalan Dermawan. Hmm, holy hills?


If I am correct,  this church which they started is now the World Revival Prayer Fellowship, a Pentecostal church, located in Aljunied. Another of my ex-classmate, Kenny Chee, is currently the senior pastor at this church. Kenny and his wife Jenny were also ex-residents of P.E. Estate.

The following photos were all taken in 1979. If you were studying at P.E.E.S. 33 years ago, you would be in one of these pictures. Do drop a line and tell us of your days at the old school.
Click on the photos for a detailed view.


Photos of the school teaching staff and the school band are located in another blog here.
- February 19, 2012 17 comments:

At Princess Elizabeth, there was little in terms of amenities for entertainment but still leisure life was rich. Residents amused themselves with gatherings at the few coffeeshops, housewives would meet in the morning at the provision shops and market stalls, and some would later gather for their mahjong sessions.

Children were left to their own devices and found activities in every way, from fishing in the longkangs (drains) to foraging in the hillsides and stealing eggs or fruits from the farmers. Girls would play catching, hide and seek or five stones.
In the evenings, residents would gather around the football field to watch and cheer the estate home teams take on each other in their matches.

But the main centre for leisure activities was the estate’s community centre.
In the history of PEE, there were 3 community centres at subsequent times.
Four, if you count the last replacement at the adjacent Hillview Estate.

The 1st tiny community centre was opened in 1952.
This was located at  #8 Philip Walk, a shophouse within the artisan quarters area.
It was chosen as it ‘centrally located’ and had a large playing field in front.
This 1st community centre was set up after early residents complained to the Municipal authorities about the lack of facilities at the new estate. There were then no medical facilities, no public telephones, no bus services or recreational facilities.
So, a unit at the artisan quarters was furnished at a cost of $500 as the first Princess Elizabeth Estate Community Centre. 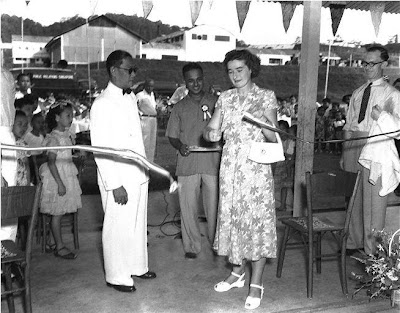 Mrs JC Lee, the wife of the Estates Manager for the Singapore Improvement Trust, opened the 1st community centre in Nov 1952. In the following years the big event was the annual Children’s Party organized by the community centre.

In 1959 the CC was moved to unit #101 next to the dhobi shop near the bus terminus.
It was to remain there till 1963 when the People’s Association (PA) formed by the government embarked on building new community centres all around Singapore.
The new PEE C.C. was built on the open field in front of Blk 17.

My own recollection of the community centres began with the 2nd one near the bus terminal. It was only about 50 meters away from my house so I was allowed to go there at will. I recalled we could borrow the chess set or carom board, which we had to sign out for and then set up tables to play. There were always some old men who were reading the newspapers in the tiny reading room. The community centre was really small and lack room for more indoor activities. 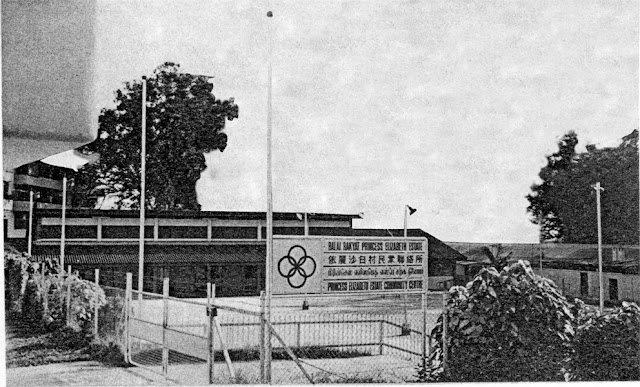 The best part of all was that there was television!
The TV was housed in a metal cabinet much like a birdhouse set on a pedestal.
Every evening, residents would wait eagerly at 7.30pm for broadcast to start.
Resident would even bring their own stools as only a few seats were provided by the C.C.
Children waited eagerly for the black & white cartoons like Heckle and Jeckel.
TV news readers like Tan Tok Peng, Steven Lee and Tan See Lai became well known personalities.
One thing I remember was that everyone stood to attention when the broadcast started or ended with the National Anthem.

In those early days of B&W TVs, the catchphrase was "We apologise for this breakdown. Normal service will resume as soon as possible". Sighs and jeers would erupt from the watching crowd. This catchphrase caught on quickly and was used especially by schoolchildren whenever something went wrong. 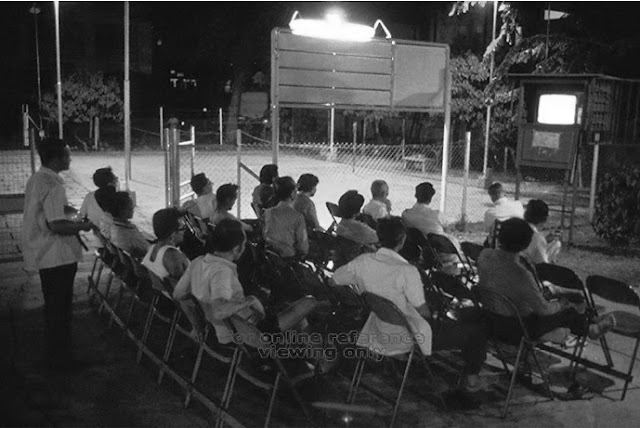 One person many PEE residents will remember was called Bisu or A-kow.
Bisu was the caretaker of the CC. He was called Bisu or A-kow as he was vocally challenged or a mute. ‘Bisu’ meant dumb in Malay or A-Kow in Hokkien (politically incorrect now but acceptable in those days). Though many thought so, he was actually not deaf and could hear as well as anyone. The funny thing was that people assumed he was both deaf and mute as he could only utter guttural sounds and gestured all kinds of sign language to communicate.

The C.C. also had a PAP kindergarten and many resident children in the later years would have attended this kindergarten. When the adjacent HDB Hillview Estate was built in the mid 1980s, a newer C.C. called the Bukit Gombak CC was built there. This new C.C. eventually replaced the old P.E.E. Community Centre.

This was the original Princess Elizabeth Estate School crest.
The school colours were dark green and yellow. 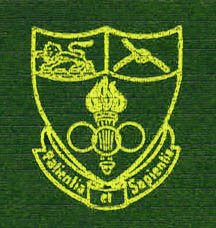 The motto then was "Patientia et Sapientia" meaning Patience and Wisdom.

I graduated from PEES in 1967, and so I do not know when exactly the crest was changed to the new colourful emblem below. 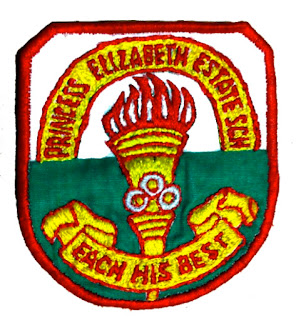 The 'new' school crest with the new motto "Each His Best" and the banner "Princess Elizabeth Estate School" over the torch.

PEES relocated from Hillview to Bukit Batok New Town in 1987 and so the 'estate' became redundant. The school was renamed Princess Elizabeth Primary School and the school crest was then revised to the current school crest. 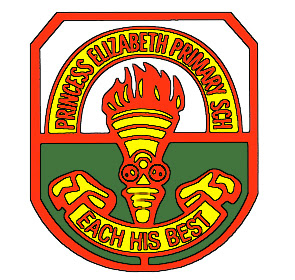 Email ThisBlogThis!Share to TwitterShare to FacebookShare to Pinterest
Labels: Bukit Batok New Town, princess Elizabeth Estate School, School badge, school crest
Newer Posts Older Posts Home
Subscribe to: Posts (Atom)
If you have lived at Hillview or Princess Elizabeth Estate, this blog was written specially for you. Join me as I recall stories from the past about the area.
Introduction