What better way to open this year's blogging than with a heritage photo of the Scout & Cubs Troop 1403 of Princess Elizabeth Estate School taken in 1958 or 1959.

Courtesy of Akela Rosy (Mrs Rosy Bramphy) who had sent it to Ebert Upatissa, who kindly allowed me to post it here in my PEE blog. It took a while for us to try and come up with the names of those in the photo and I guess we succeeded to a good extent. Thanks must go especially to James Chan Kum Sung and his brother, Kum Choy who is in the picture and later became a Queen's Scout, and Tay Kay Swee for coming up with most of the identities.

However. it is still not complete and we hope that anyone who can further identify the missing names will send me a note in the comments below.  Or a note of correction for the mis-identified.

We are also not very sure as to the exact year the photo was taken but only that it was a group photo of the cubs taken in front of the Principal's Office, whose door can be seen at the back on the right. The other door on the left was the Teacher's Staff Room.

To make it easier to read I am reposting the above picture with the names below and removing the sepia aging for a clearer view. 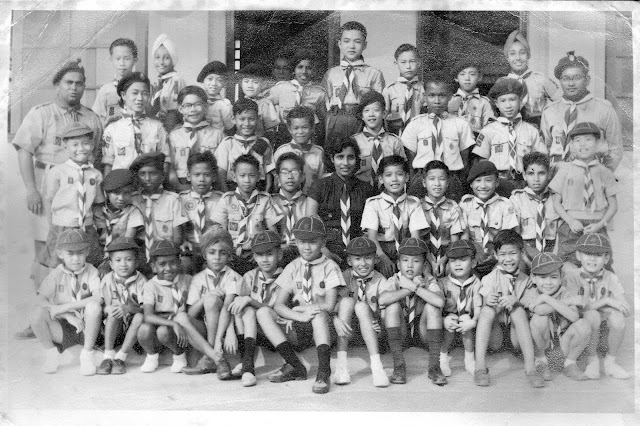 
postscript: I was just informed that the above photo was taken in 1958-1959 period. As such I have amended the heading.

Email ThisBlogThis!Share to TwitterShare to FacebookShare to Pinterest
Labels: Bernard Fernandez, Cubs 1403, princess Elizabeth Estate School, Rosy Bramphy, Venugopalan.
Newer Posts Older Posts Home
Subscribe to: Posts (Atom)
If you have lived at Hillview or Princess Elizabeth Estate, this blog was written specially for you. Join me as I recall stories from the past about the area.
Introduction