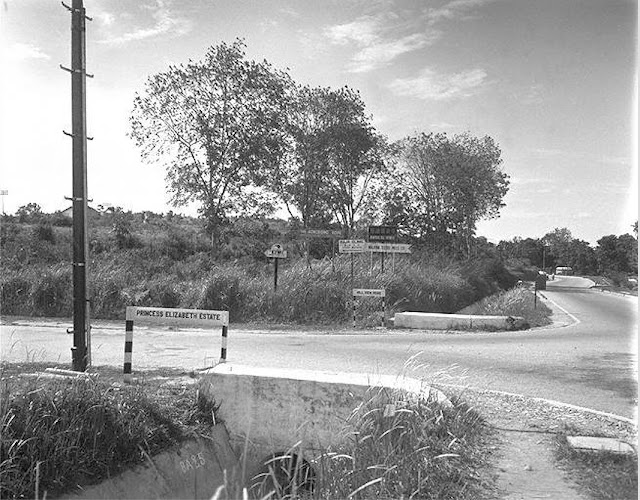 Found an old photograph showing the Hillview Road entry towards the "Princess Elizabeth Industrial Estate" taken in May 1956. Can you recognise this spot?

The S.I.T. blocks of flats at Princess Elizabeth Estate were built in 1953. At that time, this was the only road access to the housing estate and to the few factories that were set up at then, such as Kiwi Shoe Polish, Eveready Batteries (National Carbon), Malayan Guttas, Hong Kong Rope Manufacturing and Malayan Textiles.

Besides the road signs "Princess Elizabeth Estate" and "Hillview Road", there are five other signboards visible. Due to the low resolution of the photo, I can only make out three of them - Raja Clinic, Kiwi Polish and Malayan Textile Mill Ltd. Can anyone decipher what the other signboards indicate?

The Chartered Bank branch would be built the following year at this junction. The Green Bus Company had started its No. 5 bus service along this road in February 1953 and there were bus stops on either side of Hillview Road just left of this junction (without shelter!)

Today, exactly on this junction sits the Hillview MRT Station of the Downtown Line.

The origin of Tengah

The Tengah region is a large land area located in north-western Singapore, bounded by Lim Chu Kang Road, Choa Chu Kang Road, Ama Keng to the north and the Tengah River to the east. It's claim to fame basically lies with the fact that the British Royal Air Force had an important airfield, RAF Tengah, built there in the early 20th century. This military airfield is still in use by the Republic of Singapore Air Force and is today known as Tengah Airbase.

I had previously written a bit about Tengah in relation to the 19th century Chu Kang farming concession system in Singapore. However, it was in dribs and drabs, so I thought it would be good to consolidate the facts into a unified blog article. This is especially because Tengah has been in the news lately with regards to a New Town being planned for the area.

Fact 1: Tengah does not mean centre or middle, as most people assume!
Yes, in the Malay language, tengah is translated as middle or centre, but the word Tengah as a location in Singapore does not derive from Malay. In fact, Tengah's etymology is derived from Chinese!

Fact 2: The Tengah River, a tributary of the Kranji River, did not give rise to the name of the area. It was the reverse, the name of the region, Tengah, gave the river its name!

Fact 3: Tengah was a chu kang formerly called Teng Chu Kang. It was established as a gambir and pepper farm in the 1850s. For more detailed explanation of the Chu Kang farming system in Singapore, you can refer to my other blog articles here, here and here.  It was one of 35 officially recorded chu kangs (gambir farms) in Singapore in 1855.


Gambir was the main cash crop grown in early Singapore.
After the British East India Company set up their trading post in Singapore in 1819, with the eventual take-over of the entire island in 1824, coupled with the discovery that the gambir extract could be used for the tanning of leather, the gambir industry in Singapore took off. Gambir became the main cash crop of the local economy in the fledgling British colony. The tremendous demand for gambir enticed the Teochew immigrants to open up the forested interior regions of Singapore to cultivate gambir and pepper.


By the 1840s, large farming concessions, known as Chu Kangs, were established at riverine areas mainly in the northern and western regions of Singapore.
The authorisation to start a farm could only come from the Temengong of Johore, (or later from the Municipal government).
The Temengong issued a title deed known as a Surat Sungei , allowing the holder to open up lands and to cultivate certain riverine areas listed in the surat sungei.
The area listed was usually unclaimed forested land that was accessible only by that river that ran beside the land.

The concession holder was called a 'Kangchu' (master of the river) who was given full local authority over the running of the concession, including farming, rentals, the right to brew liquor and sell pork, and even to establish brothels. He was the de facto headman of the region that would bear his name.
He also had to set up an access point by the river that became known as the 'Kangkar'. This was to be his homestead and port of call and was often only a jetty with his house nearby. It was usually from this point that a village would spring up.


Tengah founded in 1853 as Teng Chu Kang
In 1853, a surat sungei was issued to a man named Teng Ah Ting (var. spelt Teng Ah Tong, Ten Ah Tong). He was given a concession to farm the land bordering Chua Chu Kang to the east, Wha Heng Kang to the South and Sun Li Kang/Lim Chu Kang to the west. It was adjacent to an un-named tributary of the Kranji River.

Teng Ah Ting the kangchu, was colloquially called Teng-Ah, and his farm was known as Teng Chu Kang or sometimes recorded as Teng Ah Kang.
The tributary river beside his farm came to be called the Teng-Ah River. In time, it was simply called Teng-ah (Tengah).

In 1855, when the municipal government conducted a survey of all farms in Singapore (for tax purposes), Ten Ah Kang was listed as one of the smaller farms with 17,000 plants of gambir and 8,000 vines of pepper. ( It was less than 2 years in existence then)
In comparison, neighbouring Chua Chu Kang (also spelt Chu Chu Kang), established much earlier in the 1840s, had 300,000 plants of gambir and 53,000 vines of pepper.

Collapse of the gambir industry in Singapore
Between the 1870s to the 1890s, the planting of gambir slowly moved into mainland Malaya as the soil in Singapore was leeched of its nutrients and was no longer fertile for this crop. Other crops replaced gambir, mainly pineapple and, later, rubber.

In the mid 1930s, as a result of a British initiative to defend Malaya from perceived foreign threats, land was acquired around Lim Chu Kang and Tengah area for the construction of a new military airfield. As most of this new airfield was built over the former Tengah farm area, the airfield was named Tengah Airfield.


In 2016, the Housing & Development Board announced the creation of a new town to be called Tengah New Town. This area is actually south of the original Tengah region, in what was known as Bulim, Hong Kah and Lam San districts.
Thanks to the HDB, Teng Ah Tong's legacy lives on for posterity in Singapore.

Email ThisBlogThis!Share to TwitterShare to FacebookShare to Pinterest
Labels: Chu Kangs in Singapore, Chua Chu Kang, gambir, gambir farms, Lim Chu Kang, RAF Tengah, Tengah, Tengah Airbase, Tengah New Town
Newer Posts Older Posts Home
Subscribe to: Posts (Atom)
If you have lived at Hillview or Princess Elizabeth Estate, this blog was written specially for you. Join me as I recall stories from the past about the area.
Introduction