When I started this blog, the intention was to recall, record and share old memories of the former estate.
This include any tales of places around the vicinity that I can remember.

The story of the haunted Hillview Mansion at Jalan Dermawan had attracted the most attention and hits of all the articles that are in this blog. Most of them as a result of searches for 'haunted houses in Singapore'  or similar paranormal searches. I get requests almost every week from readers wanting to know more about the demolished mansion. I have tried to reply to everyone that provided a return address.
However, I think the time has come for me to maintain the current mystic about that place. With everyone knowing the background, the mystery is lost. So from today onwards, I will not divulge any further details as to how or why the mansion became haunted. Apologies to those who can't have their curiosity assuaged.


After the mansion was abandoned, there were 2 major landslides on that property.
Once in December 2006 and again a few months later in 2007. Both landslides occurred on the same slope and affected many adjacent homes downslope.

Here is a photo of the second landslide that occurred in 2007. 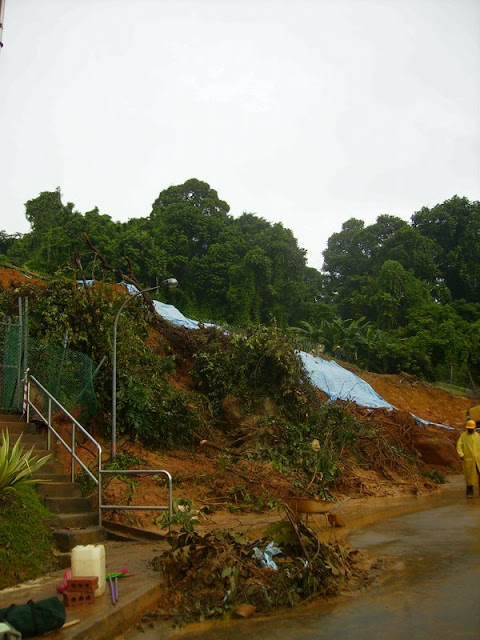 The land has been stabilised by the authorities since and today the view from the top of that property is really very scenic. The land has still not been developed since the mansion was abandoned in the 1980s.


Related links:
The burial of the Hillview Mansion
The haunted house at Hillview