Princess Elizabeth Estate was blessed with a regulation size soccer pitch built within the estate compound.  Lovingly referred to by residents as  “the Big Field”,  the football field was the focal point for residents who gathered in the evenings to watch football matches or team practices.

Having a communal field led to many informal teams formed by groups of residents and some became very proficient in their skills. E Shanmugaratnam was a national player who honed his skills playing with the estate teams. The 1st inter-constituency football championship was won by a team from P.E.E.

In the 1960s, the pitch was the home ground for the Union Carbide factory teams. They had staff players like Mahat Ambu, who was the Singapore Centre Forward and Quah Kim Choon from the famous local Quah football family (brother of Kim Lye and Kim Song).
Large crowds would gather whenever the Union Carbide teams played. The Union Carbide ‘A’ team won the Singapore Business House Football League many times and was a renowned powerhouse in Singapore football in those days.

Here is a photo of one of the resident football teams.
Photo was taken during a competition at Boys Town in 1975. 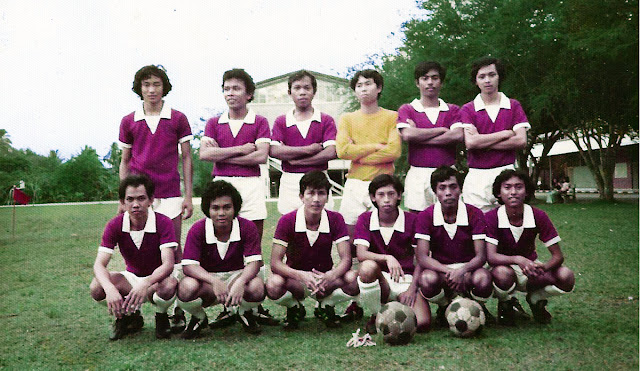