When I was a youngster living at Princess Elizabeth in the 1960s and 70s, there were no such things as Nature Trails then. Instead, the entire Gombak hillside was our nature trail. Climbing up Bukit Gombak was part of our routine and exploring the hillside was just a game to us kids then.

I was lucky because our family washerwoman, Mrs Cheng, lived up on the slope near the RAF radar station. It was common for us to visit and spend the day at their kampong house simply because it was fun. Their house was surrounded by fruit trees. There were durian, mangosteen, rambutans, buah kelondong, putosan, sugar cane and star fruits. Papayas and pineapples were growing wild everywhere! It was like a Garden of Eden.


I only dread the times when I had to attend to the call of nature. The outhouse was smelly and full of flies. And you really only had newspaper to finish your business with ! The outhouse was about 30m away from the main house and had a small cement cess pit. A farmer would come everyday to collect the waste to use as fertiliser!

Somewhere up on the Gombak ridge there was a natural spring that gush forth magically from underground between huge boulders. I remember we called it the Moses Well. The spring gave out so much water that the hillside residents ran bamboo pipes and hoses from it and piped water directly to their houses. The spring created a stream that flowed right down towards the Taluki kampong. There was so much water from this spring that small fishes and crabs could be found in the stream that flow through the kampong.

For those who lived at the estate, you might remember the stream that flowed through this kampong.
It ran beside the shortcut track (Lorong Taluki) from the estate towards Boys Town direction.
There was also a Guan Yin Temple up on the slope of Bukit Gombak behind block 23.
You can't see it from the estate as it was blocked by trees, but there was a well worn path leading to it.

I was reminiscing about these things today when I went exploring the old Gombak Nature Trail.
When the HDB built Bukit Gombak precinct as part of Bukit Batok, they converted the old Gammon Quarry into a lake and named it Little Guilin because the granite formation looked a bit like its famous namesake in China. The park that surrounds the lake is called the Bukit Batok Town Park and has the Gombak Stadium and Sports Hall incorporated as part of the entire park. 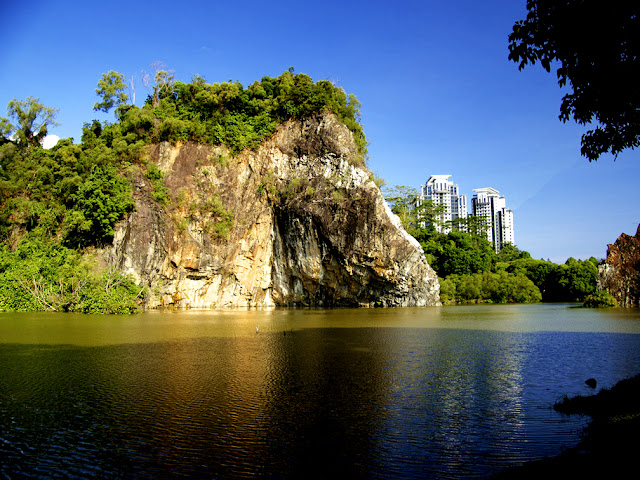 Though many may not know it now, there was a Gombak Nature Trail created as well as part of the recreational facilities. This Gombak Nature Trail started from the Stadium and went across the Gombak ridge towards Hillview. The trail ended at Chu Lin Road at Bamboo Grove Park.

This Gombak Nature Trail, though less than a kilometer in length, is no mere walk in the park. Compared to the Bukit Batok Nature Park Trail, this winding Gombak Trail can be said to be for the fittest. It's a tough hard climbing trail. But why it is that the Gombak Nature Trail is not so well known? 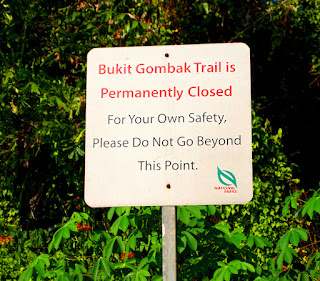 Unfortunately, due to landslides in 2006 at the Chu Lin Road end, NParks decided to close the trail rather than spent money repairing or creating a new trail. The entrance to the trail is boarded up and the signs says " permanently closed. "

Despite this, crazy fellows like me know that the trail still exists. Only that officially the authorities will not be responsible if you go there yourself! You can get through the boarded up entrance with a bit of ingenuity.

The sad part is that ever since it was closed, the jungle has started to reclaim the trail but it is still passable today. I went to the cliff edge to take a photo of the Little Guilin lake but unfortunately the view is now completely blocked by shrubs. Luckily I still have an old picture of the view from the time it was open.

You can see photos of the old Gombak Nature Trail that I took today. Click here.
If you are contemplating on some adventure, I suggest you bring a friend along for safety.
It's a bit creepy going alone. haha.