The development of Hillview Avenue

Hillview Ave was further extended in 1965 during the construction of Popular Estate and ended at the Cycle & Carriage new car assembly plant. Beyond this laid the kampongs and farms of Jurong.

By the early 1970s, Hillview Avenue was extended to join Jurong Road by connecting it to Jalan Perang. It became an alternative bypass between Jurong and Woodlands, provided you were able to get under the girder bridge at Hillview Road.


In the early 1980s, HDB built the Hillview Estate to the north of P.E.Estate.
While to the southern end of Hillview, Bukit Batok New Town was beginning to be developed by the mid 1980s. 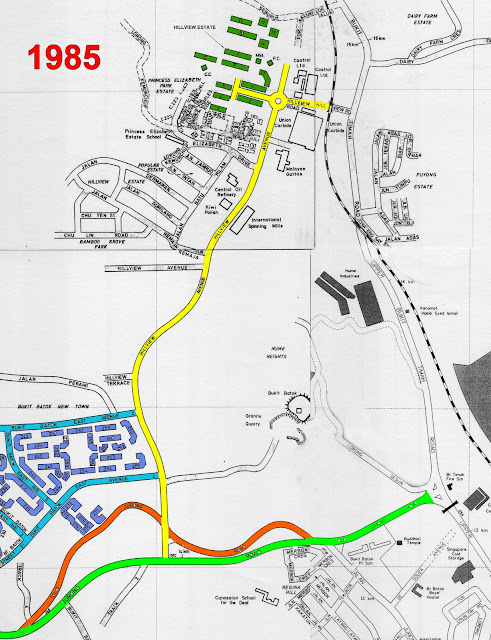 
The only remnant of Jurong Road today now lies parallel  to the PIE from Bukit Batok Road to the PIE ramp at Jurong West Ave 2. The stretch that was previously known as Jurong Lama. It is still functioning as a minor roadway today.