As I mentioned in my previous blog, I was taking my visiting sister and nieces around Princess Elizabeth for my sis Jen to show her daughter the old abode. After seeing the old primary school, mention was made of the old sports 'houses'.

All the schoolchildren were divided into 4 sports houses. These 'houses', a typically British tradition of naming sport teams in a school, were Kiwi House, Gammon House, Hume House and Guttas House. The houses were also assigned a color - Kiwi-Blue, Hume-Red, Gammon-Green and Guttas-Yellow.

The Houses were 'adopted' by the major factories located around Princess Elizabeth Estate.
These companies sponsored the purchase of sports equipment for the school when it was set up and the sport houses were named after them in appreciation.

Among the four, I believe fewer would know of The Malayan Guttas Company.
In reality, Malayan Guttas was the biggest processor and supplier of Gutta Percha in the region.
What in the world is Gutta Percha, you ask?
Frankly, even I didn't know what gutta-percha was until many many years later when I was a young working adult!
And I am very sure a lot of you would still not have heard of it till now.

Gutta Percha is a rubber like substance made from sap of the the Palaquim (chiku) tree. The sap on processing became a rubber-like substance that was very pliable and not stiff like vulcanized rubber.
Gutta percha trees were indigenous to the Malay Archipelago. The anglicized word gutta percha comes from the Malay getah perca meaning rubber sap. It was used in place of natural rubber for things like medical gloves, dental fillings and especially for electrical cable insulation.
It was also the secret ingredient for another famous product.

Besides being the major processor and supplier of this raw gutta percha, the Malayan Guttas Company was more famous for another product it manufactured at Hillview Avenue.
This was the Wrigley Chewing Gum.
Older residents at P.E.E. would only know the factory as 'the chewing gum factory'.

Gutta percha was the major component of chewing gum.
It was the inedible sticky stuff that you chewed on and when spat out caused all sorts of disgusting sticky situations!
This factory at Hillview Avenue supplied Wrigley worldwide the substance to make chewing gum. 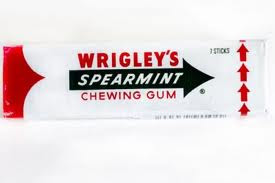 Of course, we all know of the infamous 1992 Singapore ban on chewing gum.
But by this time, gutta percha was no longer used in chewing gum in favour of other chemically made substances. This led to the factory land being sold to property developers eventually after the area was rezoned. I guess it was fortuitous for the parent  company as they made a nice profit from the land sale.
The parent company of Malayan Guttas Ltd at Hillview was the Wrigley Company of USA.

Today, on the site of the former Malayan Guttas factory sits the Hillington Green and Summerhill condominiums.

postscript: 10 Feb 2012.
I found an old archive photo of the Malayan Guttas factory.