The area now called Dairy Farm is best known for the new Nature Park developed and launched by NParks in 2009. Dairy Farm is also the location of several upscale condominiums located just beyond Hillview Avenue.


The locale is called Dairy Farm simply due to the fact that the entire area was formerly a real dairy farm (duh?).  In 1929, Singapore Cold Storage Ltd bought 28 hectares (about 70 acres) of land That were former gambir farms and converted it into a dairy. The purpose was to provide milk for the local market. They imported Friesian cows from the Netherlands and Australia for this venture. Up till then, local milk was of an inferior and unsterile quality. Dairy Farm brought in new technology and modern methods of milking.

The dairy farm was vast and I could remember that it spread all the way over to the back of the Chestnut Drive area. You had a panoramic view of rolling pastures and you could see herds of cows all over the pasture on most of the days. This was back in the 1960s and 70s as I can recall,  this was where many PEES schoolboys used to play at times. This was part of our kampong area.

I had a teacher called Miss Ng who lived within the Dairy Farm premises at Dairy Farm Crescent. She was our Cubs troop leader and we used to visit her home together with another teacher, Mr Peter Sundra. Mr Sundra seemed to us at that time to be very close to Miss Ng!  Hmm, I wonder if anything developed beyond that?  Miss Ng would take us on walks around the dairy farm as she was very familiar with the place.

This was how it looked like during my childhood days. 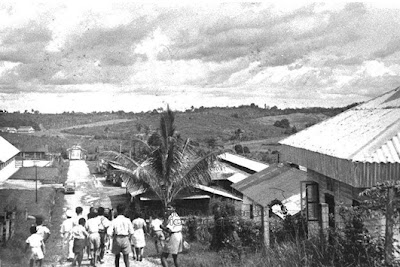 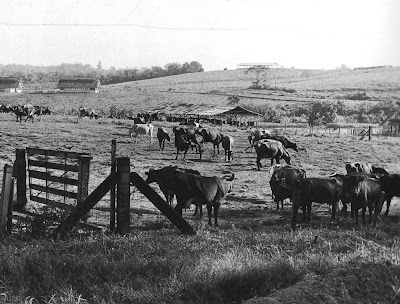 At that time, Dairy Farm Road was just a track that led from Upper Bukit Timah Road. The only portion that was paved headed not to Dairy Farm but to the Dairy Farm Quarry located nearby.  In fact, I can remember that the track was gated by the PWD (Public Works Dept) who ran the quarry operations, I believe. Entry was restricted to the quarry and you could only use the track to walk towards Dairy Farm.

Older residents will also recall the Malayan Gammon Company located at the junction. They produced concrete pipes and you couldn't actually see the Dairy Farm from Bukit Timah Road as it was blocked from view by the Gammon factory.

Here is a video I made in 2009 just after the opening of the Wallace Education Centre at Dairy Farm Nature Trail.