For a small estate of 200 households, there was an exceptionally large proportion of Catholics living at Princess Elizabeth Estate. Most of them attended the nearby St Joseph Church. It was usual to either walk to church through the Lorong Taluki kampong or by bus to the Salvation Army bus stop at Hillview Road and walk the short distance to church.

For administrative purposes, the Catholic church is divided into dioceses, each run by a bishop, and further sub-divided into parishes for easy administration. So the parish priest would be the one you may be most familiar with as he tends to the area where you lived.

P.E. Estate came under the domain of St Joseph Church at Upper Bukit Timah Road. The parish priest at that time was a dominating larger than life figure called Fr Joachim Teng. With his booming voice, he sent shivers through many parishioners and really scared the hell out of a lot them! (In the process I guess saving them for heaven).  Children ran away at his sight. Yet Fr Teng tended his flock zealously, going round his parish that once stretched from Jurong to Woodlands. Older parishioners will recall him riding his British Matchless motorbike in his cassock!

Fr Teng was renowned as a church builder. He is credited with building St Francis of Assisi at Boon Lay, St Anthony at Mandai, St Stephen at Aljunied, and of course, the re-building of St Joseph at Bukit Timah.
For all his efforts, the government awarded him the Public Service Star. Fr Teng died in 1984.


St Joseph Church at Bukit Timah has a long and illustrious history. It was built in 1846 by French missionaries to tend to the rural catholic population.  St Joseph used to own huge plots of land around the church at the Chestnut/Cashew area. Boys Town & the CHIJ convent were all built on land previously own by St Joseph Church. It was also one of the few churches that had its own cemetery by the church.

I had blogged once before about St Joseph (article here). The famous explorer and naturalist, Alfred Russel Wallace also used St Joseph Church as his base in his early research into natural evolution (see this article here)


My earliest recollection of St Joseph as a child around 6 or 7 years, was of the doric columns and the huge  statue of St Joseph at the door way. At the main door there were two giant clam shells which was used to hold holy water. I recall playing on the stone steps leading up to church. They were covered with moss wherever there was a joint or crack. One scary thing for a child was being told that the graves of the early parish priests were buried in the aisle of the church. We were always afraid of stepping over their grave stones! 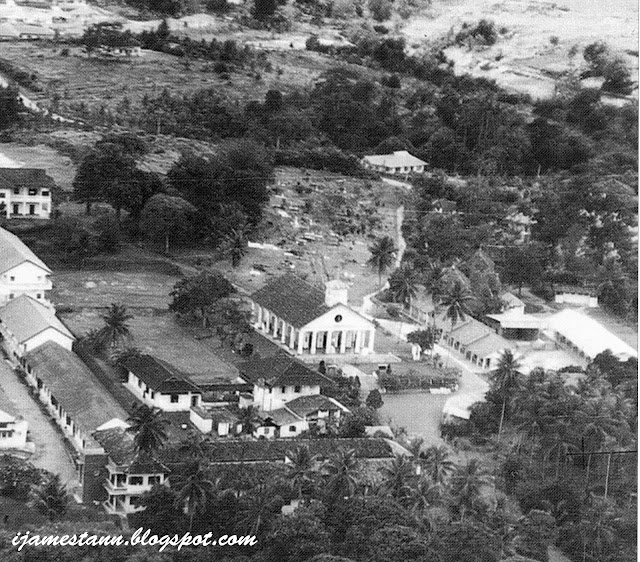 The church was already at that time getting old and run down. This church that I attended as a child was actually the second St Joseph church building that was erected in 1905 to replace the original wooden building.  Fr Teng initiated the 3rd re-building of a new St Joseph in 1963 and was completed in 1965.


For those who may be unfamiliar with Catholic practices, the Catholic Church is 'universal'. It is the same church wherever you go. It has the same beliefs, the same rituals and the same dogmas whether you are in Singapore, Australia, Africa or anywhere. Your 'membership' comes with your faith and baptism. Catholics may attend any church in the world and the only difference may be the vernacular.

A dilemma arose for Catholics in Princess Elizabeth Estate in the early 1970s when another Catholic Church was built at the other end of Hillview Ave on Old Jurong Road. That will be in another blog....