Malayan Guttas Ltd  was a pioneer factory at Hillview, Bukit Timah.
Many of you may never have heard of this company,  unless perhaps, you once lived nearby around Hillview or you might have known of it perusing through this blog of mine where I had previously written a few articles about it. (links below)

However, you will definitely recall its most famous product - the Wrigley Spearmint Chewing Gum.
The Wrigley Company of Chicago USA set up the factory in 1947 soon after the end of World War Two.

Following the end of war, the British Government offered extremely good incentives for foreign companies to invest in the colonies to revive the war-torn countries' economies. One major incentive was that their manufactured goods would be entirely tax-free if it was manufactured, distributed and sold in any British Commonwealth nation.

As a result, Malayan Guttas became the biggest manufacturer and distributor of chewing gum in all the British Commonwealth out from its factory in Singapore.
The other major incentive for Malayan Guttas was that its principal ingredient for making chewing gum could only be found in the Malay Peninsula, i.e. the then Malaya, Borneo and Indonesia. This was the resin Gutta Percha.

Gutta Percha resin is the inedible bit that gum chewers spat out and made a mess of the sidewalks!
Gutta Percha came from the endemic Sapodilla tree, of which the Chiku fruit tree was one species.
However, extracting the gutta percha resin was primitive even in those days. It had an unsustainable and destructive process in its extraction. They had to chop the entire tree down to bits and boil the wood to extract the resin.
By the 1960s, due to the scarcity of the Sapodilla trees, they switched to the resin of the Jelutong tree. So Malayan Guttas became the biggest source of Jelutong resin and the centre for worldwide distribution.

Ironically, chewing gum was banned in Singapore in 1992 but by a strange twist of fate, the entire region of Hillview where the factory sat was then re-designated into a 'residential development zone'. The Wrigley Company sold the land to a private developer for a fortune in the late 1990s. The land was developed into the now Hillington Condominium complex.

Recently, I was very fortunate to receive a package of old photos from Switzerland.
It came from the daughter of Mr Bünzli who was the General Manager in the late 50s to the early 60s.
In those days, the GM was numero uno. He oversaw the entire operations and personally lead many expeditions to Borneo to source for Jelutong resin.

The cache of vintage pictures, of which I will release periodically in future articles, were of the factory operations and of the staff.  Many of the staff were from the old Princess Elizabeth Estate and if you do recognise anyone of them in the photos, please comment below. 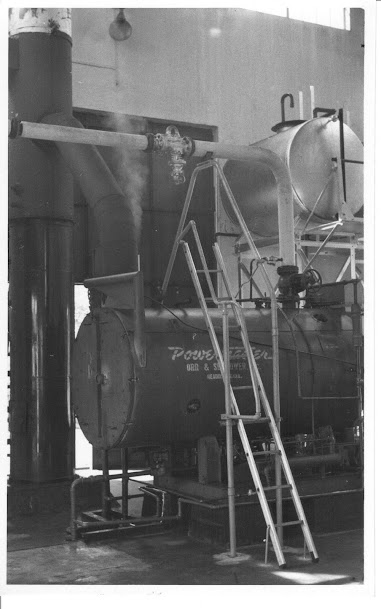 The boilers used for resin extraction

Links to articles about Malayan Guttas
Factories around Princess Elizabeth Estate (5)
A daughter remembers her father at Malayan Guttas
A history of Hillview Part 2
- December 09, 2020