In commemoration of the marriage of Princess Elizabeth to Prince Philip in Nov 1947, the British colonial government started a fund called the Princess Elizabeth Central Celebrations Wedding Fund.
The wedding celebration  fund, raised by donations, would be used to commission jewellery as gifts for the royal couple's wedding and the balance would be used for some other social welfare purpose in their name.
The municipal authority finally decided that the remaining fund would be used to build low-cost modern housing for the locals, especially for those considered low wage earners, in view of the critical housing shortage at that time.

Princess Elizabeth Park was built on 12 acres of land donated by the French bank Credit Foncier. This comprised 16 rows of single storey units, later termed Artisan Quarters, with 84 homes and 16 shophouses.
As the construction costs were through donations, or called subscriptions at the time, rentals for these artisan quarters were kept at a very low rate. The low rental enabled workers to afford new modern housing with running water, electricity and sanitation, modern facilities which were scarce at the time.
The artisan quarters were readied for occupation in 1952.


The Singapore Improvement Trust (SIT), built an additional 8 blocks of flats comprising 78 units in  6 blocks of 3-storeys and 84 units in 2 blocks of 7-storeys. These new additions, though built at the same time, were not funded under the Princess Elizabeth Wedding Fund but by the SIT itself. 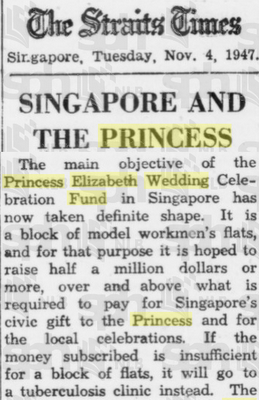 Twenty-five percent of the allocation for artisan quarters were given to low wage government servants such as trash collectors and road sweepers. Priority was given to applicants who worked in the vicinity. This resulted in the estate becoming very close knit as many neighbors were also colleagues at work.

The Green Bus Company started a bus service (service #5) from the new estate running along Bukit Timah Road to Queens Street terminal in 1953. 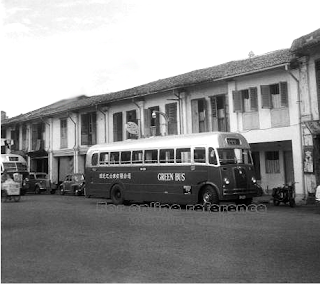 A school was later built in 1955 to cater to the children in the estate. The school was named Princess Elizabeth Estate School.
A purpose-built Community Centre was raised in 1963 by the government People's Association. It was built on the open field in front of Blk 17.
In 1967, 52 hawker stalls was built near the junction of Elizabeth Drive/Hillview Ave to replace the makeshift market stalls located outside the community centre at Philip Walk.

Then and now...
Princess Elizabeth Estate survived till the mid 1990s when home ownership was emphasized over rentals by the government and residents were evicted by the year 1995. The Princess Elizabeth Wedding Fund Act was repealed in 1998. The estate was demolished with only the Primary School remaining and converted for use as the Red Cross Home for the Disabled.

The land which was once P.E.Estate was left vacant till 2011 when developments for new condominium projects started.
- December 20, 2011