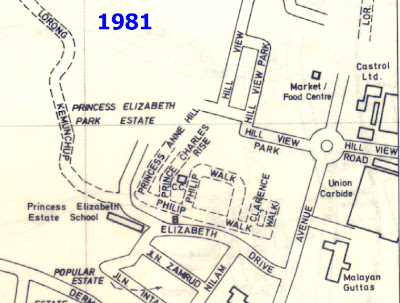 The estate was built on the south eastern slope of Bukit Gombak.
Popular Estate and Bamboo Grove Park were built in the late 1960s on the hillside west of P.E.Estate. The adjoining Hillview Estate was built by the HDB around 1980.  A Chinese kampong was located at the Lorong Taluki / Lorong Seburut area, where the current Mindef lies.

The most prominent factory then at the estate was Union Carbide. To direct taxi drivers to locate P.E.E., you would tell them to go to 'Tien Tor Long", in Hokkien - "the battery factory".

After Singapore's Independence, the Hillview area was identified for light industrial manufacturing and more factories were set up along Hillview Ave such as Castrol,  Cerebos, Yakult, Lam Soon Oil and Cycle & Carriage. Today all these factories have been relocated and replaced by condominiums. 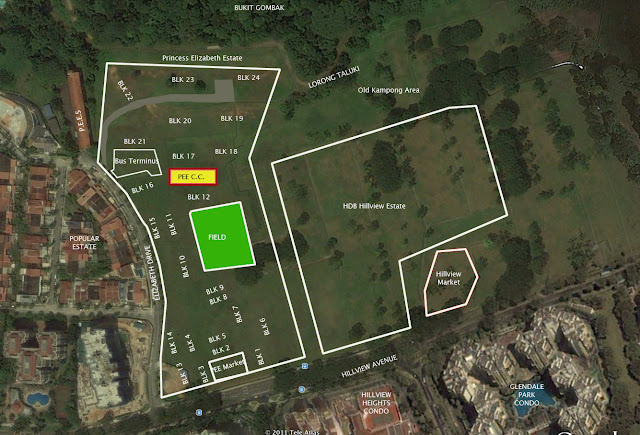 Princess Elizabeth Estate had a unique addressing system.
Before 1965, there were no block numbers. Each house was numbered serially from No.1 to No. 142. Units on the upper floors were suffixed with A-B-C-D-E-F, representing the 2nd to 7th floor.

There was in fact only 1 paved road within the estate called Elizabeth Drive. The other street names were not 'roads' but basically footpaths leading to the various blocks. These were Princess Anne Hill, Prince Charles Rise, Clarence Walk and Philip Walk.