This article is not a history of the company, of which I do not claim any expertise of, but is of my personal experience when I worked there from 1977 to 1980.

It was immediately after completing my NS and I was just adjusting to life outside the military.
Coming with a technical background, I was employed as a Quality Inspector in the car assembly line.
My job was to inspect the workmanship of Mercedes Benz cars coming off the Trim Line. This was where they fitted the luxuries into the bare chasis, i.e. all the trimmings. At this stage, the vehicles were still without the engine and wheels!

About a year into the job, I was promoted to the Final Line.
This was the best part of the assembly line as this was where the cars were given their identity plates and came alive. My job was to ensure that all the cars were up to the required German standards and fit for delivery to the customer.

Part of my tasks involved taking the cars out for a test run. The test route was Hillview Avenue, down Jurong Road, Lorong Sesuai up to the top of Bukit Batok hill, round to Upper Bukit Timah Road and back to Hillview Ave, passing Princess Elizabeth Estate along the way. A circuit about 5 km long.


Of course, the test run involved more than just taking the car out for ride. Along the way, checks were done for noise levels, rattles, brake efficiency, wheel alignment and drift and also testing the Blaupunkt sound system.

I had previously written about testing the Mercedes Benz cars along Hillview in my blog about the Bukit Batok Nature Park. Click here for that article. 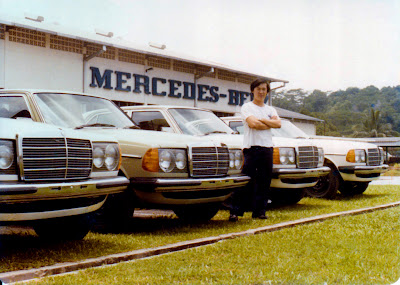 Besides the Mercedes 200 and 280s models, there were the occasional 230s and 250s assembled on special orders. The C&C factory also assembled Japanese trucks from Daihatsu and Isuzu, as well as the chasis for the Mercedes Benz buses.

In 1980, the government withdraw the tariff protection for local cars and it no longer became viable to assemble cars in Singapore. All the car assembly plants in Singapore, i.e. C&C, Ford, Nissan and Volvo ceased operations. Cycle and Carriage converted their plant into a car repainting centre and maintenance workshop for their Mercedes Benz franchise.

After Hillview was rezoned into a residential area, C&C sold the property to developers who built terrace homes on the former site. C&C invested in developing a smaller site across the road which was previously used as a storage space. This became the Meralodge Condominium.