After all these years describing the various former companies and factories located at Hillview, you would think that Malayan Textile Mill would be on top of the list. It being one of the original four factories set up back in 1953. Yet until now, it was left out because I really did not have much information on this entity! It'll also probably be the last factory to be covered in this series on the factories around Princess Elizabeth Estate. 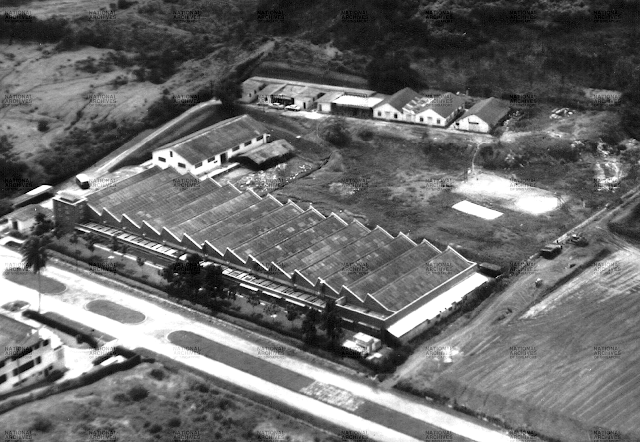 Fronting Hillview Avenue with its distinctive serrated roof, the Malayan Textile Mill was built on a large 3000ha piece of freehold land. In the 1950s, textile production in East Asia was becoming very popular due to the low cost and producers in Hong Kong, Taiwan and Japan were getting renown for their quality textiles.

Malayan Textile Mill was set up to spin yarn.  Yarn being the raw material used by other textile mills to produce finished fabrics, textiles, knittings and other types of cloth.

In the tumultuous 1960s, the factory was involved frequently with workers wildcat industrial action and strikes. This was a time of growing awareness of workers rights, mainly over the low wages and working conditions.

By the 1970s, there were up to 25 textile mills in Singapore but most were inefficient and unprofitable. It was an industry where local expertise and skilled workers were in very short supply. Experienced textile workers tended to migrate to other factories with better pay. This eventually led to a detrimental situation for the entire textile industry in Singapore, and to the eventual closure of most mills.

The Malayan Textile Mill was bought over by another company and renamed as the International Spinning Mill. It lasted well into the early 2000s when it was sold to real estate developers to built condominiums on the site.