Recently, I was chatting with a friend about the old Singapore-Woodlands Railway, aka the Tank Road-Kranji Railway of 1903. This railway ran past Hillview along Upper Bukit Timah Road. I mentioned I had an old map which showed the railway alignment and went to search my archive. I have not used this map previously in my blog because I couldn't link much to what I could say about Princess Elizabeth Estate, it being drawn 30 years before Hillview and PEE even existed.

Here is an extract of the 1924 map. I have superimposed the main roads of today's Hillview into the map for you to reference in reading the map.

On seeing this old map and scrutinising it closely this time, I came to a realisation that I was mistaken all this while about the old 1903 rail alignment. I had always assumed that the line ran alongside Upper Bukit Timah Road from Mendoza Village, up to where the Ford factory would be, and then followed the road downhill and northwards towards Bukit Panjang.

From the map, I saw that from where Ford would be, it continued up on a high embankment (in fact following what is today Hume Ave!) before coming down towards the Chartered bank /MRT Station level and then continuing on northwards.
It did not run alongside Upper Bukit Timah Road from where Ford would be to the Chartered Bank! You live and you learn new things everyday. I stand corrected.

In line with the recent articles I wrote about the history of Hillview, and looking closely at the map, you can see that the entire area was marked with 'rubber trees' or rubber plantations (green map symbols). So this confirmed that the entire Hillview area was a rubber growing region in 1924.

Also marked in the area around the peak of Bukit Gombak (top left) you can see markings of 'pineapple' symbols.  This would also confirm that the Hillview region went through the agricultural stages from gambier to pineapple and lastly to rubber.

Lastly, this map also vindicates what I always debunked as a myth when people ascribe the name Bukit Batok to the 'coughing' of the dynamite blasting of the granite quarry giving rise to the name of the hill as Bukit Batok - "Coughing Hill".  (Map lower centre)
The quarry at Bukit Batok, called the Poh Kim Quarry, operated only after World War 2 ended in 1945. Yet this 1924 map already had the name Bukit Batok pinned to it. So the coughing hill theory is totally debunked.

Something, you might also want to note is that in this 1924 map, Upper Bukit Timah Road and Woodlands Road were actually named as Kranji Road.

This is a superimposed Google map over the 1924 which I used to get the road alignments. 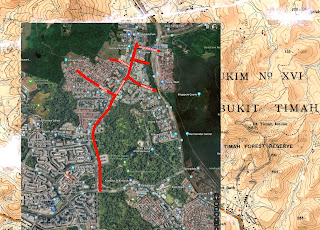 Note: The 1903 Tank Road-Kranji Railway is a different rail line to that of the 1932 KTM (Keretaapi Tanah Melayu) Railways that ran almost in the same alignment from the black railway bridge at Rail Mall to Woodlands.
- July 13, 2020