Hillview alive with the sound of music (2)

The Pest Infested band was formed in 1967 by Princess Elizabeth boys John Ali and Ernie Koh.
In the beginning, they had Francis Chan (lead guitar), Sng Say Juan (drums), John Ali (Rhythm guitar) and Ernie Koh (Bass guitar/Vocals). This was the founding lineup and the band specialised in hard core Blues music.

In the early days, the band played gigs mainly in British forces camps and at 'Tea Dances' but soon had opportunities to play support at the Golden Venus Nightclub at Orchard Hotel.

Back in the late 60s, Golden Venus Nightclub was the apex for band boys. If you were somebody, you had to be playing at the Golden Venus. I guess the nearest thing today would be like comparing it to Zuok or St James today. They also landed a stretch at the London Scene at Hotel Malaysia - another happening place at that time. 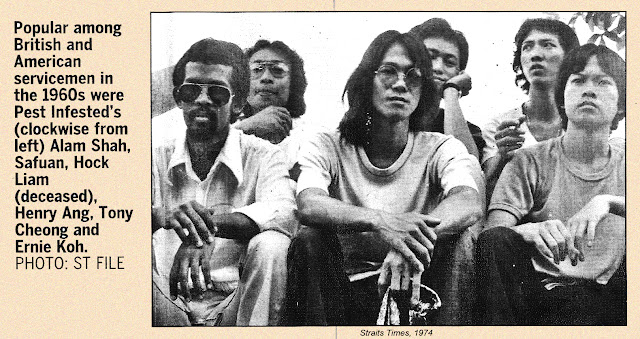 As common with bands in the 60s, there were lots of lateral movement among musicians, back ups and vocalists. So it was not uncommon for band members to leave and new musicians joining the band later.

Even Rex Goh auditioned once for Pest Infested but found he wasn't compatible with the blues genre that Pest Infested played. Rex Goh later became the guitarist for the Australian group, Air Supply.


I managed to contact Tony Cheong, one of the final members, who wrote me as follows:-

Here is the pic of us (above photo), it was taken near our practise studio at Chestnut Ave in 1974. Before Chestnut, our equipment & studio was at a kampong house in PEE ..... remember the forested area at the fringe of the estate, beyond Kum Sung's block.
We rented a whole kampong house with grass laid compound from a family who had moved out, for just $40/month. And we would practise & blast our rock music & no one would complain cos the  nearest kampong house was about 70 m away. Cool huh!

The guys you see in the photo are actually 3rd generation PI, except for Ernie(founder) & Shah(2nd gen). Well, we went on to play for another 4 to 5 years until our day jobs became too much of a commitment to continue the music.
I think the last gig was at a club called Queen Bee at the Queens hotel at Mt Elizabeth.

I remember your dad Tann Yean, he used to hang out with my dad & Ernie's father, Koh Keng Kwee.

Sadly,  most of these talented local bands slowly faded away in the early 70s in part due to clampdowns by the authorities. I guess band members found it hard going with all the restrictions and connotations with hippie culture and drugs at that time. Pest Infested disbanded around 1978.

If you wish to hear a sample of the music of the 60s, click here. (This is not the Pest Infested but I am still hoping I can find a recording of them somewhere)