Hillview alive with the sound of music (3)


The Blue Stars was one of the 60s era pop bands which originated from Princess Elizabeth Estate.

As was usual at that time, it consisted mainly of male instrumentalists on electric guitars, drums and other instruments and backed up with a female vocalist.


In all honesty, I didn't know much about the Blue Stars as I was just a little kid at the time, but I do remember always trying to sneak into their practice sessions. They would practice at the home of David Moss who lived in the same block as me. Kids like me were always fascinated by the band boys, perhaps we were the groupies of those days! Alas, most of the time, we pesky kids were always booted out during their practices.

To find out more of the Blue Stars, I tried to locate some of the band members and managed to contact David Moss who kindly returned my email with details of his band. This was what David wrote....

First let me congratulate you for producing such a wonderful blog bringing back fond memories of the days gone by. You must have done a lot of research to be able to cover life as it existed then in that old estate. And those photos ... where did you get them? I enjoyed the article on Pest Infested. I hadn't had the pleasure of seeing or hearing them perform but heard that they had a huge following of rock and blues fans. They were formed a couple of years or so after the Blue Stars disbanded.

Unlike Pests Infested, we played mainly dance music and the old rock & roll hits that were popular in the 60s. Patricia Pestana was a soloist in her own right and joined us as and when a female singer was needed. She was also known as the "Connie Francis" of Singapore.  We played for the British forces here, at corporate dances, fashion shows, concerts and other popular venues.

Today, Ian lives and works in Sabah, Brian and Patricia reside in Western Australia. Larry and I still live in Singapore while Jeffrey has sadly passed on.

The timing of your email coincided with a surprise visit by Brian from Perth. I had not seen Brian for decades. And of course that gave us the chance of catching up on things while reminiscing the good old days. Here's a recent picture of Brian (on the left) and me at a local restaurant. 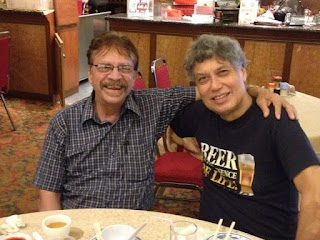 I hope this little piece of data is helpful and thank you for your interest in our Band. And of course, keep up the good work!