Princess Elizabeth Estate was built on the slopes of Bukit Gombak.
Bukit Gombak is the second highest hill in Singapore at 139m (437 feet) and used to house the British Royal Air Force radar station in the 1950s & 1960s.

Today, almost the entire ridge of Bukit Gombak, from Choa Chu Kang to Hillview, has been fenced off as a restricted military zone. In fact, Bukit Gombak is the location of the Ministry of Defence in Singapore and therefore one of the most secured areas here.

However, when the RAF were based at Gombak, they only occupied the summit and the hillsides around Gombak were squattered by hundreds of kampong houses all round.
The main areas for squatters and their kampongs were at Bukit Panjang beside the KTM railway tracks, around Chua Chu Kang Road near the British Army BOD (British Ordnance Depot), and at Jalan Perang which ran around Bukit Gombak on the Choa Chu Kang/Jurong side.

Closer to Princess Elizabeth Estate, the entire Chinese kampong that was at  Lorong Taluki and Lorong Seburut were also built at the base of Gombak.

Here is a montage sketch of the Bukit Gombak ridge. I think there's TMI (too much info!) in it but I think you get the idea. (click on the sketch if you really want to see a detailed view) 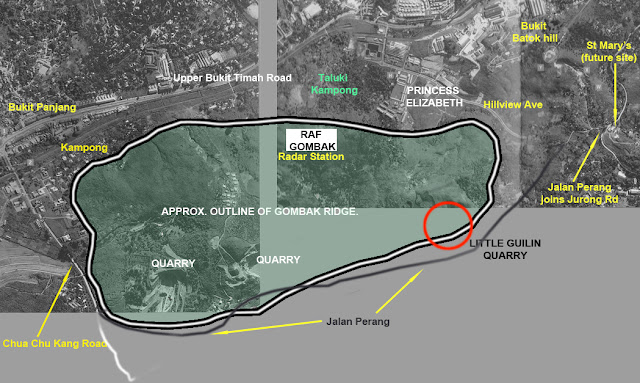 There were 3 major quarries on the western side of Gombak ridge along the old Jalan Perang. Only the smallest today is conserved as the Little Guilin Park.

When Singapore took over from the British and converted Gombak into a military zone, all the kampongs and squatters around Gombak were resettled. 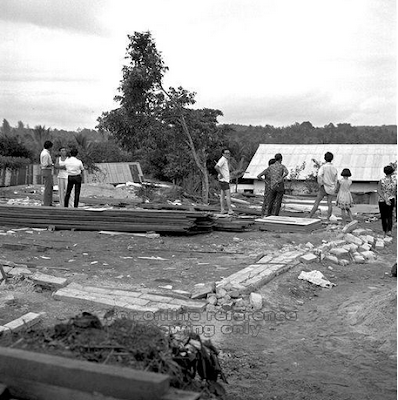 My blogger friend Lam Chun See had just posted a series of 12 photographs in his blog he received from his British friend who was based in Singapore in the1960s. I am prompted by his posting of the photos to write this post.


I recommend you visit Chun See's blog to see alll the pictures of Gombak ridge, read his comments and those from his readers about Bukit Gombak. His blog is at this link  click here.