The No.5 Green Bus terminus.

The bus terminus was located between the row of shophouses (blk 16) and block 21 where I lived.
This was just beside the Princess Elizabeth Estate School.

At that time the car population was small and so the car park could comfortably fit 2 to 3 buses along with all the other cars. The car park then was not paved with bitumen but was covered with red laterite stone gravel.  I remembered that my white school shoes would get covered with red dust each time I crossed the car park! It was in the later 1960s that the car park was paved and had proper lots marked out for cars and the buses.

In 1971, the Green Bus Co merged with other chinese 'mosquito bus' companies to form the United Bus Company. The No. 5 bus route was then renamed as UBC Service 173. The route was extended to start from New Bridge Road in front of Singapore General Hospital and it went through Orchard Road via Stevens Road along this new route.
However, the amalgamation of the chinese bus companies did not suceed and by 1973, the government stepped in to re-organise the bus system and formed the Singapore Bus Services (SBS) monopoly.


During my secondary school days (1968-1971), I had to rely on the No. 5 bus to get to my school at Dunearn Road. The buses in those days were, for want of a better word, atrocious. They were prone to frequent breakdowns, stuffy, leaked when it rained, had bad seats, was hot and noisy and worst of all, had poor drivers and surly rude bus conductors.

Some of these buses were like these shown in the photos below. They were the British-made Seddon and Vulcan buses which were the norm at that time. 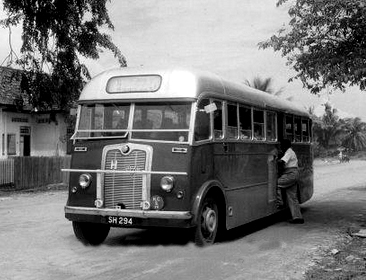 The same few buses were assigned to this route and usually with the same drivers and conductors as well. So you often see the same staff on their rotational cycle many times each day. From experience, we learnt which buses to take or to avoid in order to have a better experience with the bus service. We knew which buses tended to break down more often and which unfriendly bus conductors to avoid.

I remembered there was an old driver whom we called "The Vulture" because he was haunched and when he drove the bus, he was always bowed over and seem to gazing only at the road immediately in front of him all the time. He was always assigned to drive one of the older half-cab buses that looked like this. We nicknamed his old bus the 'boneshaker' as it vibrated and rattled a lot. 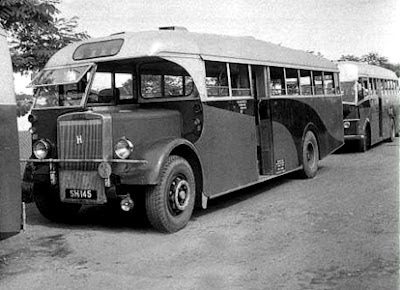 I also remembered there was a very nasty chinese old conductor with white crew cut hair and un-buttoned shirt. He was bad tempered and was always shouting at the passengers, especially students. Woe be you if you got caught under-paying your fare!
The buses were always crammed to the brim and shouts of "ho lang loke" (let people out!) were usual. If you press TWICE by mistake to signal Stop, the driver, depending on his mood,  may or may not not stop!
You can't even protest if he doesn't stop where you want.

The most irritating thing about taking the Green Bus those days was that it always seem to run low on fuel, and 2 out of 3 times the bus you were riding on would make a detour to the depot at the junction of Clementi Road/Bukit Timah Road to top up its fuel tanks.

It was most annoying because of the extra 'wasted' time it took. The driver and conductor would get off to take a short break whilst the passengers were left sitting or standing in the hot crowded bus. All this while the diesel fuel was being pumped into the bus. There was no consideration about passenger safety at all!
Imagine the fumes you had to breathe in, and what if there was a fire? I can't imagine the horror. Yet this was a routine thing that took place on almost every trip. If you were lucky, the bus might be back out on its journey again within 10 minutes.

Around the early 1980s, another SBS bus service no. 193 was re-routed to end at this bus terminus at Princess Elizabeth Estate. Service 193 then had the unique distinction of having a bus route that connected 2 'royal' bus terminal stations - Princess Elizabeth and Prince Edward.

By the time Princess Elizabeth Estate was demolished in the late 80s, SBS service 173 was already re-routed to ply the new Bukit Batok New Town. SBS 173 still continues to serve the Hillview area today except that it no longer terminate there with the demolition of both Princess Elizabeth and Hillview HBD Estates.


Related links: Pictures of the Terminus at P.E. Estate