Lelong is a Malay word roughly translated as an auction or clearance sale. But for those of us who grew up in the late 1960s or 70s, lelong would be the exciting night market or 'pasar malam' that came to our housing estate once a week.

At Princess Elizabeth, Wednesday nights were lelong nights. Starting around 7.30pm in the evening it operated until the crowd dwindled. It was held just outside the community centre along the footpath between the bus terminus and the football field. 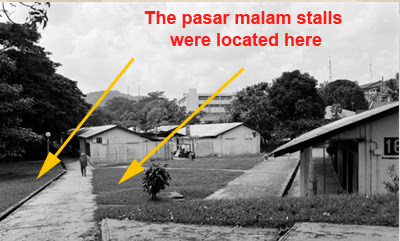 In those days, when shopping malls were unheard of, when going to town was an excursion you made only once in a while, the pasar malam was the big event when the 'shops' came to you!
The Wednesday lelong at P.E.E. was small in comparison with those at nearby Beauty World or the Friday night pasar malam at Bukit Panjang, but still to us residents it was the high point of the week.

Housewives could get their kitchenware, pots and pans and ready made cheap clothing. Strangely, I always remember that the cloth seller was ever the most popular and he sold lots of striped pyjamas material. Housewives at that time were all sewing their own clothes, especially for their children.

Then there were the ever popular food vendors. The satay, the rojak, the kachang puteh man, the bread seller, the char kway teow lady and not forgetting our favorite Magnolia Ice Cream man on his motorbike sidecar.

This would be how it looked like at that time. 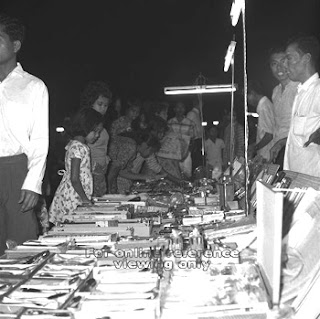 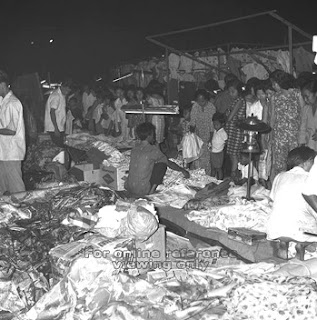 Today's pasar malams are organized differently from the past. Now, most are professionally organized and space rented to vendors who try to maximise their sales by running the stall for weeks and often for the entire day. Perhaps only the layout of the wares is reminiscent of the old days.


In those days, the stalls were make shift, though I presume the usual vendors would occupy the same space each week.  New vendors simply set  up their stall at the end of the existing stretch. Some simply laid their wares on top of tarpaulin on the floor.

The stalls would be lighted up with kerosene or spirit pressure lamps. I really never knew how these hurricane lamps worked but the filament net 'bulb' always fascinated me. I wondered how that glowing piece that looked like a tiny beehive could give off light and yet not burn.


One thing I am very sure of is that todays generation, and in fact those born after the 1980s, would not have known of another light source that the vendors used. This was the carbide lamp.
I remembered that the kachang puteh man, the Magnolia ice cream man and the bread seller used carbide lamps for their illumination. The rest used the kerosene lamps.


The carbide lamps were strange things. It gave off a strong burning smell and the flame hissed like a blowtorch. It was frightening and fascinating at the same time. To make it burn brighter, they would simply add more water into the lamp!

Sadly, as Singapore progressed, the pasar malam started to see its own demise. Hawkers were chased off the streets by the authorities and vendors were encouraged to take up HDB shops. As people become more affluent as well, they started to shun pasar malam as 'low class' and preferred the new 'shopping centres' being developed everywhere. By the end of the 1970s, the lelong at P.EE. was but a skeleton of its glory days in the 60s.