The Haunted House at Hillview

Hillview Avenue has its fair share of notoriety when it comes to the paranormal.
The so called Hillview Mansion was infamous for being haunted.
For years, it was an open secret spoken only in hush hush tones around the neighbourhood.
But it was well known amongst those who had an interest in things of the other dimension.

The Hillview Mansion was located at the highest point of habitation allowed on Bukit Gombak.
Its commanding view would be panoramic from Bukit Panjang right across to Clementi.
It was also variously called the Green House, or sometimes The Blue House (as it had a blue roof). It would be the dream house of any self respecting multi-millionaire and would probably be the most expensive house in that area of upscale millionaire neighbours.

But alas, the mansion was never completed.
Construction abruptly stopped in mid project and the building was abandoned from then on.

The Hillview Mansion was located right at the end of Jalan Dermawan. It would have been the highest house on the hill. Beyond that was the boundary to the restricted ' trespassers will be shot '  Mindef land.

Why was it abandoned after more than half the building was completed?
My favorite rumour is that of the death of the mistress who was to occupy the house.
Seems she died when she 'felled' from the unfinished balcony during an inspection of the construction works. Just google 'Hillview Mansion' and you can read all the conspiracy theories there.


Here are some of the pictures (taken off the Net) that shows the abandoned haunted house. 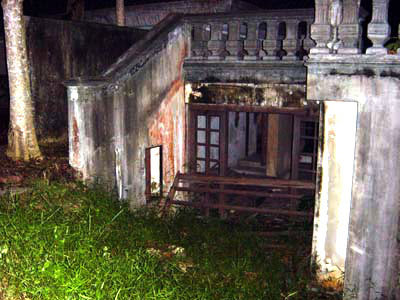 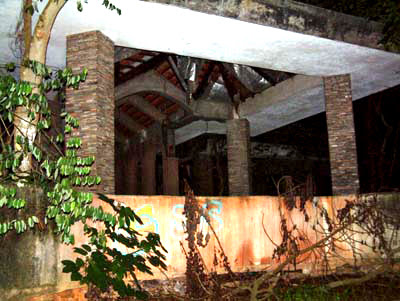 Banshee cries, wailings, globs have all been reported over the years coming from the site. The plot is securely locked and protected with spikes and barb wire to prevent people from accessing the ground. Why is this so? What is the purpose of such extreme methods to lock people out even till now?

The house remained abandoned since the mid 1980s. It was was finally demolished sometime in the early 2000s, but the land has not been redeveloped since. The site still attract paranormal hunters to this day.

In December 2006, a massive landslide occurred at the very spot where the old house stood.
Gossips of the wrath of the spirits spread like wildfire amongst residents of the nearby estates.


WARNING: SPOILER AHEAD!
If you are one of those paranormal hunters, stop here!
Do not read further, as I am about to reveal a bit of the secret of the Hillview Mansion!

The name 'Hillview Mansion' was attributed to the abandoned dwelling by paranormal followers.
It never had a name at all.

The 'Hillview Mansion' was originally owned by Mr Chua Boon Peng, Chairman of Cycle & Carriage Industries Ltd. The company owned large plots of land in the Hillview area. Land which have been developed into condominium projects namely Meralodge, Merawoods, Montrosa and Hillview Villas which sits on the former car assembly factory site.

The plot at Jalan Dermawan was bought by Chua Boon Peng to build a private home. The Feng Shui was perfect for a home. In the 1970s, he paid a whopping $7m for that plot of land. An amount that was unheard of in those days.

Coincidentally, I worked for Cycle & Carriage in the late 70s, while a cousin was a long time secretary for the Chua brothers at C&C. To that, I was very familiar with the inside story of why the project had to be  abandoned suddenly. It's a very sad tale.

In order not to spoil too much for any paranormal hunters who may be reading this, I will not reveal the reason why the house was abandoned midway through construction.  The mystery should remain a mystery... 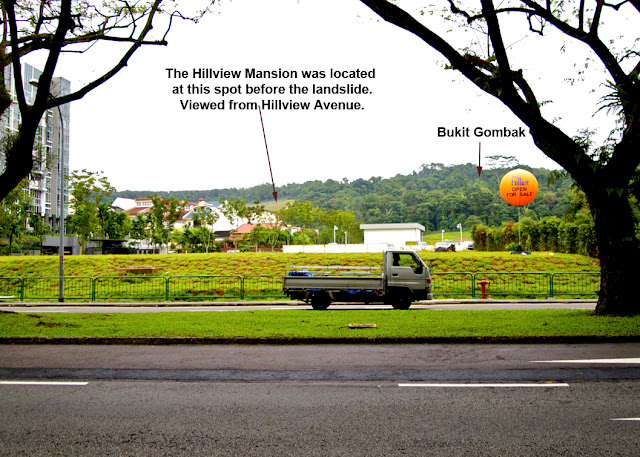 For those of you who might be curious to know the story behind the haunting of the mansion, please click here.

Related links:
The burial of the Hillview Mansion
Hillview landslide