The reservoir dam at Bukit Gombak.

On the evening of 15 July 2021, newsfeed and videos started trending on social media about a strange incident at Bukit Batok West Ave 5 beside the Gombak Stadium.
Muddy water was gushing out at a tremendous rate from a hillside near the Bukit Gombak MRT Station.


Videos above copyright and courtesy of Marcus Lim
One of these posts was from my friend, historian painter Mr Marcus Lim, who was an eyewitness to the event. In his post, he also pondered over what was happening. It was an incredible scene.

In reality, what had happened was that a part of the Seng Chew lakeside wall had collapsed inwards after a few days of rain previously and slid into the lake. The landslide caused a mini-tsunami to overflow the top and gush down the hill towards the roadside at West Ave 5. The resulting deluge flooded the roadside, stopping traffic for several hours and bringing with it debris like tree branches, logs and lots of mud.

THE SENG CHEW QUARRY LAKE
Some of you may not be aware but there is a hidden lake high up on Bukit Gombak.

It was formed from the disused granite quarry that operated there from 1947 till 1970.
It was called the Seng Chew Granite Quarry.

This disused quarry was transformed and revitalised into a lake as part of the new Bukit Gombak Nature Park and Forest Trail. It was to be one of the several features of the new Bukit Batok Town Park that included the new sports stadium and the Little Guilin Park.
(Note: The Bukit Batok Nature Park is a different park about 2km away)
However, the Bukit Gombak Nature Park and the Seng Chew Quarry Lake were short-lived, and were soon closed to the public due to several recurring landslides that occured in that area. These occurred at several places like Chu Lin Park, the Forest Trail and at the lake side as well. The public thus were denied entry for safety reasons. Only the Little Guilin Park remained open to the public.

You can read some my earlier articles about the Bukit Batok Town Park and the Seng Chew Quarry at the links here, here, here or here et al.

That may well have been the end of the story, but why did I exclaim that the Dam burst to Marcus' amusement?
Well, while some of you may know of the existence of this hidden lake, most of you will never ever know that there is a huge dam there at Bukit Gombak! Surprised?

It was so well engineered and built that you would never ever suspect that it is there.
Marcus would have been thinking I might be crazy when I said the dam burst, as would most of you. You have in your mind a dam such as the one like China's Three Gorges or Hoover Dam in USA.
A great hulking concrete structure holding back gadzillion tons of water and with a hydroelectric power station inside. Am I right? Touch your heart, ha ha.

THE SENG CHEW QUARRY DAM
The Seng Chew Quarry Dam is technically known as an earth-filled 'Embankment Dam'.
When the HDB was building Bukit Gombak New Town in the early 80s, they had a gigantic problem that they needed to settle. This was the scarred western hillside of Bukit Gombak where there were four huge former granite quarries. These were the Ideal Home Quarry, the Lian Hup Quarry, the Seng Chew Quarry and the Gammon Quarry.
*(There was a fifth smaller quarry between Gammon and Seng Chew, but that will be fodder for a new article in future)
These quarries had gouged enormous holes into the landscape.  HDB architects decided to convert the quarries into nature parks as they were unsuitable for other major infrastructure then.  Both the Gammon and Seng Chew Quarries had to undergo major civil engineering works.

The aerial photo below shows the Seng Chew Quarry in 1956, in its ninth year of operations. There was another smaller adjoining quarry to its right by 1970 when it was closed but I cannot find a photo of that era. So you can imagine how much more wider the quarry face would have been after a further 14 years of quarrying. 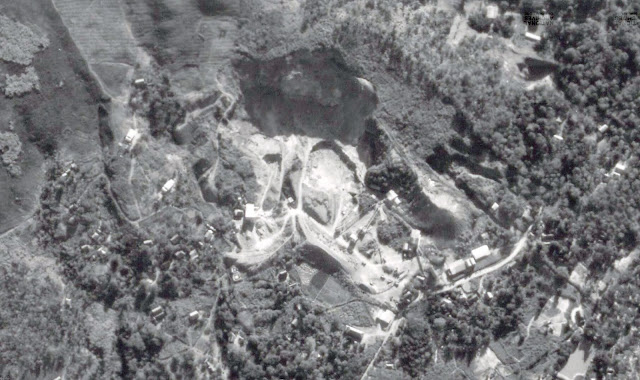 This is the same 1956 quarry photo superimposed on a current Google map extract. The circle approximates the quarry-face size in 1970 according to topographic maps of the 70s. That was how much larger the quarry had grown before mining operations ceased. For reference, Bukit Gombak MRT Station is at bottom right. 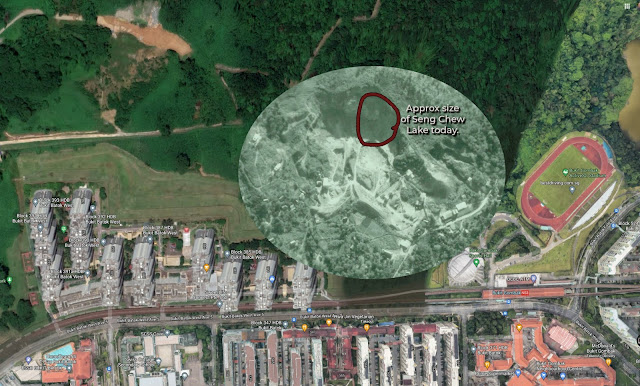 The red circle represents the size of Seng Chew Quarry Lake today as it was planned by HDB to be part of the new Nature Park.
In order to reduce it to that manageable size, they had to reinstate the entire hillside by building an earth dam over the entire area where the quarry once was. And so the 1st stage to constructing the lake was to build the new earth dam. Click on the photo above to see an enlarged view where you are able to judge the size of the 'hole' that they had to fill to build the earth dam.

The entire hillside between the Gombak Stadium and the Goodview Gardens HDB precinct
(left of pic) is in reality an earth dam that was built to enclose the Seng Chew Quarry Lake. 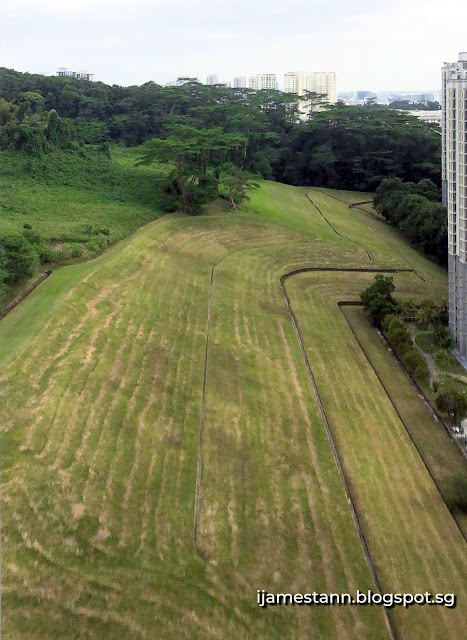 The hillslope behind the HDB's Goodview Gardens housing blocks are actually part of the earth dam.
This is the top of the earth dam that holds back the Seng Chew Quarry Lake reservoir. This was the zone where the landslide cause the lake waters to overflow and spill over the dam.
The drain on the right is known as a Spillway, it acts as a vent whenever the lake waters reaches a certain level and keeps the water level inside under control.
The sudden landslide on 15 July 2021 overwhelmed the capacity of the spillway and so the water simply overflowed this top but continued to follow the direction of the spillway.
So, in all essence, the spillway actually did its job well except that it wasn't designed for the kind of sudden volume that overwhelmed it that day.

I reckoned that the earth dam is at least 300 metres wide and 30 metres high, holding back the reservoir that became the Seng Chew Lake. An amazing engineering feat. It had been so well incorporated into the landscape that almost everyone would never believe that it is a real dam.
So now you know that there is a huge earth dam at Bukit Batok.
- August 06, 2021

Newer Post Older Post Home
Subscribe to: Post Comments (Atom)
If you have lived at Princess Elizabeth Estate, Hillview or even Bukit Batok, this blog was written specially for you. Join me as I recall personal stories from the past about the area.
Introduction