Unless you lived in the remote Choa Chu Kang area in the past, or unless you know your local geography or history really well, you probably would not have heard of Jalan Perang.

Before the 1970s, Jalan Perang was really a non-descript jungle track leading to places where people would not normally venture.
It ran along the western Bukit Gombak slope, running south from Choa Chu Kang Road all the way to Jurong Road.


This small dirt track was mainly used by kampong villagers to their smallholdings within the Choa Chu Kang/Jurong farmland as well as by trucks carrying granite from the 4 major quarries on Gombak Hill.  It looked exactly like the picture below, except I remembered it was much narrower.

The track was called Jalan Perang in English, but rightly it should be in the Malay pronunciation of Pērang, meaning 'dirt track'. However over  the years, it became anglicised and pronounced as Perang (per-rung), which in Malay means war!

This brings me to the story which I will now tell you of how this dirt track became the salvation for 420 soldiers during the Japanese invasion of 1942.
On 8th Feb 1942, the Japanese Army crossed Johore Straits and invaded Singapore through Choa Chu Kang. The defending force there was the 22nd Australian Brigade led by Brigadier Taylor.
However, the Australians were pushed back by the Japanese from Choa Chu Kang Sarimbun Beach all the way to the south of Tengah Airfield. There they set up a defensive blockade along Choa Chu Kang Road.  (See map below to have a clearer idea)
A reserve unit, called the Special Reserve Battalion comprising over 400 soldiers, was quickly despatched to Choa Chu Kang and given to Brigadier Taylor for assistance. They were ordered to defend the hills south of Choa Chu Kang Road near Bulim and were duly positioned there.
By the afternoon of 9th Feb, Brigadier Taylor withdrew his forces away from the battlefront to Ulu Pandan. In his haste to escape from the advancing Japanese, he forgot to inform the newly arrived Special Reserve Battalion about the withdrawal!


By the time the commander of the S.R. Battalion realised he had been abandoned by the 22nd Brigade, the Japanese forces had already bypassed his position in the north and south. Gallantly, the commander, Major Bert Saggers, led his men through the only way out, heading due East in growing darkness, all the time avoiding any contact with the enemy.
Fortuitously, he hit upon the dirt track and from then could make a speedy retreat towards friendly lines at Bukit Batok Hill. Thus, having saved his battalion of 420 soldiers from being annihilated by the surrounding Japanese forces. They then took up defensive position at a small hill at Bukit Batok facing the oncoming Japanese army along Jurong Road. Today, on the hill where they camped that night in 1942, stands the Church of St Mary of the Angels Bukit Batok.
Major Bert Saggers, was captured at the surrender of the British capitulation and was sent to the Thai-Burma Railway as a prisoner of war.  He survived and returned to Australia after the war. 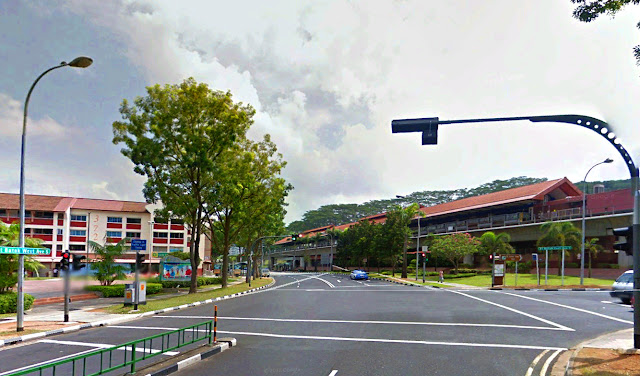