Following my article about the massacre of the Aussie soldiers at Bukit Batok during WWII, I received an email from an old friend from Sydney Australia, Brother George Boggs, a Franciscan Friar.
Brother George came to Singapore in 1970 to work at the Church of St Mary which is located at the hilltop where the Aussie soldiers were camped during the retreat from the invading Japanese Army in Feb 1942.

This was what he wrote
"... when Fr Brendan and I cut down the jungle, we discovered 2 long trenches that were still there but  it didn’t cross our minds to record it on film. I also unearthed a bomb-shell there and had it removed by the army of the time in the late ‘70s. The excavators then came in to build the Hall over the spot.  Yes, we knew the Aussies had fought on that very spot.

Have you been up to the top of Bukit Batok Nature Reserve where the Japs had hewn out of the rocks 3 or so little caves where they hid their ammunition and were camouflaged from aircraft. I believe these little caves have since been cemented in. You know, the hill behind the Fire Station and the Green Spot Drink Factory...
...but there still exists the machine gun pillbox that is inside what used be the Wei Sin School on the road up to the present Church"

His last comment about the pillbox jogged my memory! I recalled seeing the structure about 30 years ago when the hill was still only covered by lallang. Of course, at that time I simply had absolutely no interest in the remnants of the war in Singapore.
But as a result of writing this blog, and of recent sightings of land surveyors taking measurements around the church lands, I thought I'd try and record whatever is left of the pillbox before it is completely lost to posterity. 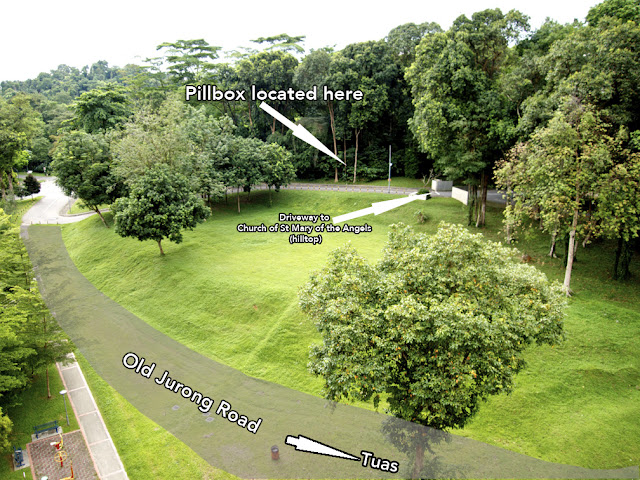 The Church is situated at the top of a hillock. Up till the 1970s, (old) Jurong Road ran alongside the bottom of this hillock and was the only access from Bukit Timah leading to Hong Kah and Tuas.

From the top of this hillock, you had a clear view of Jurong Road running towards Hong Kah.
For this strategic reason, a defence line for the British forces during WW2 was set up beside this hillock facing west from where the Japanese invaded. Today, coincidentally, Bukit Batok East Ave 3 is built upon and runs along that same defensive line. The pillbox would obviously be one of many that would ring the defence line.

This morning, I went to explore the 'jungle' that has now grown around that hillock and I did manage to locate the remnants of the old pillbox.
Unfortunately, after almost 70 years of neglect , the jungle has reclaimed most of the relic and the old pillbox is completely crumbled and ensnarled by overgrowth. A tree has actually grown through the structure.

The field of fire that the machine gun would cover would be across the farmlands that was in Jurong at the time. Today, HDB blocks occupy those former farm lands.

Related links:
The tragedy at Sleepy Valley
The Church of St Mary of the Angels