At the start of Princess Elizabeth Estate's existence in the 50s and 60s, there were no such things as Residents Committees. The Singapore Improvement Trust (S.I.T.) did have an Estates Officer assigned to look after the estate. He was based at the headquarters at Upper Pickering Street and turned up occasionally whenever there were reports of problems like failed electricity, blown street lamps or burst water pipes. His overview were mainly on infrastructure and maintenance.

When it came to social services, residents were left to fend entirely for themselves.
Perhaps because of this hardship, residents of Princess Elizabeth Estate became a shining example of community spirit. Capable residents came forth to assist one another in running the estate.
Central to all these social services was the Princess Elizabeth Estate Community Centre.
(see this link for a history of the community centres)

Remember, these were the Briitsh Colonial days, long before the present government with their People's Association. The original PEECC was non affiliated and was run by officials elected by the residents themselves.
The elected officials managed to obtain a shophouse rented from SIT, initially at No. 8 and later moved to No. 101. Some funding was also obtained from the Department of Social Welfare.

Thus, the elected management of the Community Centre became the de facto Management Committee for the entire estate. If you had problems, you went to the community centre for resolution.
The CC management committee became petition writers for residents seeking services from the various government departments. The committee liaised with the S.I.T. over all maintenance matters and took up causes for improvements to the estate. They organised the mobile dispensary, the open air cinema entertainment and even 'organised' the early market in front of the CC.

This gotong royong spirit of the PEE Community Centre was in place until the People's Association built a new Community Centre in 1963 and placed 'advisors' in every community centre under the control of the district party MP.

To have a feel of what the early residents went through, read the attached Newsletter of December 1957.   This will give you an idea of how the residents ran the estate themselves.

Please click on the picture to see a larger readable version. 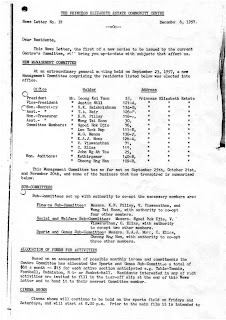 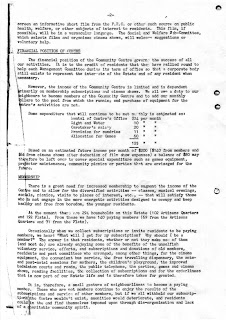 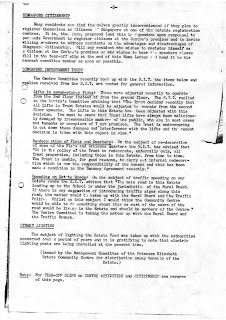 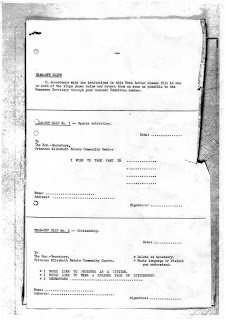