A new revelation about P.E.E.School.

Recently, I got my hands on a copy of the original school magazine of 1962.
The year 1962 was when I enrolled into Primary One at Princess Elizabeth Estate School.
I had never seen this school publication before and it was a real joy to connect with something  from my past. 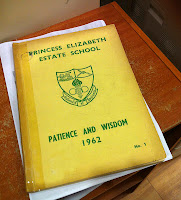 This magazine was the 1st issue published although the school had started back in 1955. It was the inaugural issue and had a No. 1 printed on the front cover.
Inside, it began with congratulatory messages from the Director of Education, Col SC Leong, messages from the Principal Mr George Catherasoo, and also a special message from the 1st ex-Principal of PEES, Mr Ponnusamy.

Photos of staff and school activities followed and these immediately brought back memories for me. I saw my ex-form teacher Miss Tan Gek Eng and my Chinese language teacher Miss Foo. I recalled how I had always hated the Chinese lessons because I was extremely weak in this subject and most of the time couldn't understand Miss Foo's teaching at all!

In previous blogs, I had mentioned about the school Sports Houses that all the students belonged to.
At the time, they were known by their sponsored names instead of colours. These were Hume House, Guttas House, Gammon House and Kiwi House. There was also a report from Tong Liang House, this was one that I had forgotten and only later blogged about after being reminded by a friend.

Then I read a report from a sixth Sports House, which till then I never even had an inkling of !
This house was called EVEREADY House. Here is the actual report from the magazine by the Asst. Sports Housemaster, Mrs J. Wong. 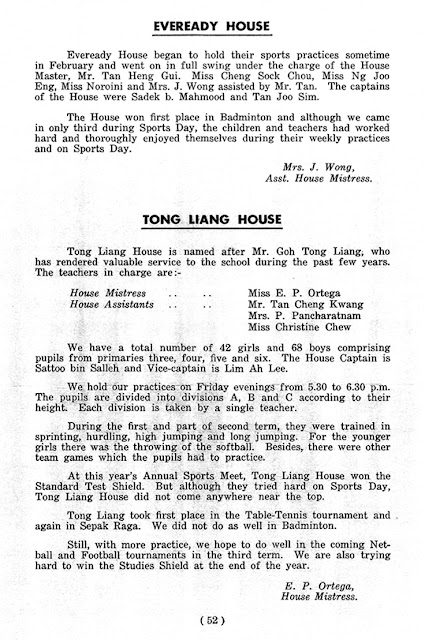 Obviously, Eveready House would have been sponsored by the Union Carbide Company located at Hillview Road. In fact, both my parents actually worked there and I have been meaning to write an article about this Hillview landmark. I am just hoping to get a picture of the factory  first.

The magazine ended with lots of well-wishes from sponsors and advertisements from companies located along Hillview Avenue. In fact, the vintage advertisements were so interesting that I will blog about these in a later article.