Bokokang - a village from our past.

Bokokang is a place you probably would not have heard of; much less know that it was in Singapore!
Its heydays were between the 1840s, a couple of decades after Raffles founded Singapore, to the 1870s. Sadly by the early 20th century, it fell into obscurity and was hardly heard of anymore.

Bokokang, (or variously spelt Bookoh Kang, Buko Kanka, Bookoh Khan) was a Teochew  village located on the Kranji River .  It was one of the ‘Chu Kangs’ of the day much like Lim Chu Kang and
Chua Chu Kang.  The Bukoh clan founded it before 1840 but the exact date is unknown. It was originally known as Bukoh Chu Kang but shortened to Bokokang as time passed, and the name became anglicised in the official records. The earliest record of this name was by government surveyor, John Turnbull Thomson, in 1844.

Why is Bokokang so interesting?
Despite being unknown to most people today, even to those studying local history, Bokokang featured prominently in the early days of Singapore. There were several reasons for its pre-eminent status.

Bokokang had a kangkar, or village centre, in that gambier and pepper-growing region of northern Singapore that became the most important trading port for that region. Its location was always marked on early maps of Singapore. Bokokang was located where today the Yew Tee and Sungei Kadut Estates are.

I first heard of Bokokang about 30 years ago when I was doing a study of the early catholic church missionary activities and the early gambier farmers in Singapore.

Gambier was already being farmed here by the Chinese even before Raffles established a trading post in Singapore. Then they were mainly used for medicinal or personal consumption. However, when it was discovered that gambier could be used for tanning and dyeing, the demand from Europe was so overwhelming and the profits from it so lucrative that every farmer wanted to plant gambier. Gambier became the cash crop that fuelled the early economy of Singapore. 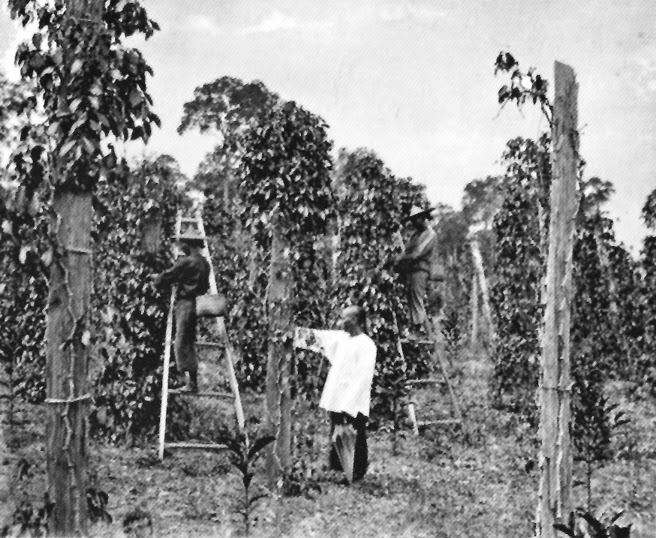 It was to the industrious Teochew farmers who sought and opened up the lands in the ‘unwanted’ jungle areas to capitalise on this demand. Concessions known as chu kangs were setup in the North, West and North-Eastern areas of Singapore. These chu kang lands came to be known by the name of the headman (the kangchu) who held the concession. Thus, major farm areas came to be known as Choa Chu Kang, Lim Chu Kang, Yeo Chu Kang, Tan Chu Kang, et cetra.

By the 1850s, there were more than 26 major chu kangs known to the colonial administration. All these chu kangs grew gambier and pepper with many of these farms being sub-divided and tenanted to smallhold farmers.
In 1855, a survey done for the purpose of adminstering taxes, showed that the biggest chu kang in Singapore then was Bokokang, which had 426 coolies working on its lands.

Bokokang by then was an established trading kangkar and commerce was all by river boats that had to travel around the coast to the city merchants to trade.  Travel across the island was not practical due to the dense jungle as well as the threat of man-eating tigers.

The first cross-island overland passage
In 1845, government surveyor John Turnbull Thomson, who was also at that time the appointed Superintendent of Roads, conducted a mapping survey from Bukit Timah Village heading towards the village of Bokokang. Together with his companion, Dr Robert Little, they marked out a route that was previously known to the local villagers towards the north coast of Singapore Island. It was said that they took 4 days to map and mark the 7 mile route to Bokokang. This route would eventually became the road known as Upper Bukit Timah and Woodlands Road.
From Bokokang, JT Thomson proceeded to survey the route towards the coast at Kranji, thus claiming the title of being the 1st to make a cross-island passage from the city to the northern coast.

The first outstation church in Singapore
In 1846, the Catholic Church established a small church at Bokokang called St Joseph Chapel. A French missionary, Fr Mauduit, was sent to minister to the immigrant Chinese Catholics who farmed around Kranji. This was the first Christian church to be set up outside of Singapore City and Fr Mauduit was so successful in his mission that by 1851, there were more than 300 Catholic converts at Kranji.

The anti-Catholic Riot of 1851
As the British colonials had a laissez-faire attitude towards activities outside the city, the rural farmlands were mainly controlled by the Chinese triads, especially by the notorious Ghee Hin Huay secret society.
One way for the local farmers to avoid the threats and intimidations of the triads was to convert to Catholicism. By doing this, they could look to the ‘foreign’ church for protection and they no longer were required to pay tithes or protection money to the triads.

The increasing defection to the Catholic Church angered the triads so much that on 15 Feb 1851 the secret society declared war on the Catholic farmers. For a whole week, catholic-owned farms were pillaged, burnt and destroyed and the fighting was finally put down through the intervention of the military forces sent by the colonial government to quell the riot. The riot began at Bokokang and spread to other predominantly Catholic areas like Serangoon. This incident was known as the Anti-Catholic Riot of 1851.

The decline of Bokokang
Gambier was the major cash crop grown in Singapore between the 1830s to its peak in the 1870s.  However, gambier was a plant that was not self sustaining nor was it environmentally-friendly. Gambier leached the soil of all its nutrients so much so that within 15 years most of the soil became infertile.
Further more, in order to process gambier, three times the amount of firewood in volume was required. The farmers had to constantly chop trees to fuel the cooking process. This resulted in devastating deforestation. In fact, by the turn of the century, it was reported that 75% of the tree cover in Singapore had been deforestation due to this agriculture. This alarmed the authorities so much that the central Bukit Timah region was declared ‘out-of-bounds’ to farming and made into a Nature Reserve to preserve what little was left of the primary forest.

After the 1850s, the soil around Kranji was no longer fertile enough to sustain the gambier growth. Farmers began to look for land elsewhere. The Bukoh clan uprooted and sought new lands around Batu Pahat and Muar in Johore State.

In 1858, a priest from St Joseph Church led a group of 25 Catholic farmers from Bokokang to new lands in Johor.  They set up a new settlement on a river that was given to them under a Surat Sungei concession from the Sultan of Johore.
The new settlement was called Pontian Kechil. The 25 farmers started the small town and the Catholic priest, Fr Augustin Perie, himself was instrumental in creating the road from Pontian Kechil to Ayer Hitam in Johore.

With the steady departure of farmers for new farms in Johore, Bokokang went into decline. Additionally, with the opening of the trunk Bukit Timah Road, river transport became a slower and less viable option. The kangkar was no longer required for transporting the processed goods to town.

Its demise was sealed with the establishment of the Tank Road-Kranji Railway in 1903 that totally bypassed the village. Through natural attrition, Bokokang was not heard of since.